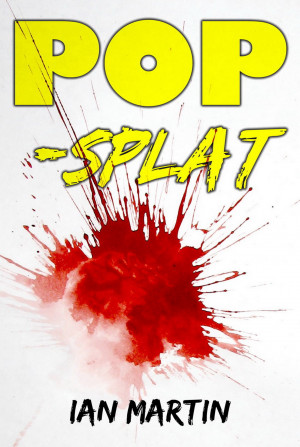 At the age of 50 Ian Martin gave up his regular job and moved to a remote coastal village near the southern tip of Africa. Drawing on his experiences as an insurance clerk, naval store man, lavatory attendant, assistant farm foreman,temporary school teacher, hospital orderly, weather station medic and house builder, he began the next phase of his life. Now, after more than a decade, he has produced three novels, a fictionalized autobiography and many short articles and stories, and he is still writing. When asked how he has been able to survive for so long without having written a bestseller, he says he is entirely dependent on his wife, who goes out to work. Otherwise he would have died from starvation.

Reviews of POP-splat by Ian Martin

I liked it, it kept me entertained and it was darkly comic. Well written, couldn't find any sort of errors, unlike some books I've read. I hope to find more by this author and would recommend this story to a friend, who has a darker sense of humor.

I thoroughly enjoyed reading this. Took me a while to finish but only because I've been reading it online whilst inbetween jobs at work.

Set in modern day South Africa, this is a very comic and tragic retelling on 'Hamlet'. All the characters are utterly deplorable but viewed as a typical product of the selfish and corrupt society they have built for themseves and completely immersed in. The writing is excellent and darkly comic, giving it a perfect blend of humour/farce and drama all in one.

Would recommend this to anyone who enjoys the darker side of comedy, and to one who isn't easily offended!

(reviewed 41 days after purchase)
RAVENSWOOD PUBLISHING reviewed on May 11, 2011

Ian Martin has coined the market on tongue-in-cheek humor. "Pop-Splat" is a hilarious parallel with a modern twist to Shakespeare's "Hamlet". The entire time reading this book it was hard to stop laughing even when some of the parts were sad.

This books was an ingenious farce and delightful to read. If you need enjoy dark comedy and interesting remakes of classic characters you will love this book.

(reviewed 8 days after purchase)
Sally Apollon reviewed on Dec. 13, 2010
(no rating)
I loved Hamlet & studied it, so was very familar with the plot, themes & characters. I have a number of critisisms and a number of complements of this novel. Firstly, I enjoyed the South African setting, I know relatively little about this culture, language & society, so I did enjoy the exposure to that.

Matt as Hamlet was not completely convincing to me. He was a forlorn, tragic character, appearing to be a victim of his environment, although I was repeatedly disheartened by his lack of initiative. I was amazed that he mustered the strength to avenge his father's murder.

Ophabia was probably my favorite character, naive, but well-meaning--I did think her suicide was well-described and fitting of Ophelia. I had to go look up Phillip Glass's music and found the music and reference to "The Hours" to add significantly to the whole scene. As in the movie it was bewildering to me to see a young person with the possibility of a long, fruitful life despair. I guess my own worldview isn't quite pessimistic enough to jive with this.

Matt's mother, Trudy was unbelivably despicable, I was trying to draw a comparison to Hamlet's mother, but I couldn't quite do it. I did think there was some maternal love in that case, wheras Trudy made a mockery of the word "maternal".

I found the book to be an easy enough read, the last third was certainly the page-turning part, prior to that there was a lot to wade through between the apocalyptic, intellectual dialogue and another level of Matt's self-destruction. I can appreciate the sense of impending doom, but at the same time found the concept of the 50/50 Foundation hopelessly Utopian, inevitably doomed to failure. Although I have to agree that this recurring dialogue emphasized the impending doom of everyone in the book.

I did really enjoy the local Medicine Man scenes and it was intriguing to me to ses that juxtaposed with the Western Medicine.

I don't think I'd neccesarily choose to read another in the Shockspeare series, if more should appear, much as I love Romeo & Juliet, Macbeth and other plays, I honestly think I would prefer to read a straightforward thriller by this author.

"This book is dedicated to THE YOUTH in the hope that they will reject the crappy values of their parents.”

“No, no tragedy, because tragedy is supposed to elicit pity, not disgust. This is the disgusting story of Matt Dreyer’s short life and begins with the murder of his father.”

Ian Martin is brave, really brave. It is clear from the very first paragraph how daring this book is. If you think these excerpts are shocking, prepare yourself for worse. The storytelling quickly evolves into a graphic orgasm of controversial thought.

The tale of Matt Dreyer starts in the wealthy suburb of Constantia, Cape Town. Matt is a student who grew up in a corrupt household, where adultery, violence, lies and deceit were common fare. When his father, Bruce, is killed in a questionable hijacking, Matt’s world is tumbled into despair. He starts to question the very fabric of his false existence and falls head first into disaster. The story is based on the tragic Shakespeare tale Hamlet. This modern take, however, is relentless and in your face - aimed at our desensitized generation.

Pop-Splat will shock many readers. If you fall into the conservative demographic, this book might not be for you. There is much swearing, blasphemy, gruesome killing and sex. However, if you can look past these, you will find an exciting, fast-paced story that grips you and takes you along on a crazy hell ride.

Though an adaptation of Hamlet, Pop-splat is written as a novel and set in a South Africa context. The characters resemble the original ones and certain scenes and events will seem familiar.

The accidental killing of Ben Apollis (Polonius) is a great example of how Martin has twisted Hamlet into a wild narrative and fit it into a South Africa context. Ben is mistaken for a burglar while he tries to hide behind a curtain. Matt proceeds to bludgeon him while on a bloodthirsty mission to stoop a burglary.

The novel is peppered with great thoughts, realities and ideas about the modern generation. These are delivered by Horry (Horatio) and Ed, Matt’s roommate at Rhodes University. During the final few pages everything is put into context.

The intense vengeance within Matt’s careless behaviour and his violent killing form a fitting climax. When Horry shares the final answers about the killings with the press, the impact of the novel hits its mark.

Some might see Matt as a ridiculously deranged maniac, but he is one of the few who have managed to take drastic actions against their upbringings, the corrupt society and the shallow façade many people inhabit. He is the hero who culls the corrupt members of our society.

POP-Splat will make you squirm and make you think. It is an odd combination, but it works. It is like a rollercoaster ride without a safety harness. Brace yourself.

You have subscribed to alerts for Ian Martin.

You have been added to Ian Martin's favorite list.

You can also sign-up to receive email notifications whenever Ian Martin releases a new book.