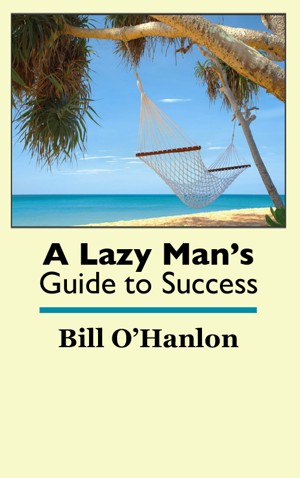 A Lazy Man's Guide to Success

By Bill O'Hanlon
Rated 4.00/5 based on 1 reviews
This breezy, succinct book by Bill O'Hanlon, featured Oprah guest and author of 30 books, gives you everything you need to know to figure out what to do with your life and succeed at it, even if you are lazy, flaky, perfectionistic or fearful. A fun, irreverent and inspiring read.

Bill O'Hanlon, MS, LMFT, has authored or co-authored 34 books, the latest being The Therapist's Notebook on Positive Psychology (Routledge, 2011), Quick Steps to Resolving Trauma (W.W. Norton, 2010), A Guide to Trance Land (W.W. Norton, 2009), Write is a Verb (Writer’s Digest Books, July 2007) Pathways to Spirituality (W.W. Norton), Change 101: A Practical Guide to Creating Change (W.W. Norton, Fall 2006), and Thriving Through Crisis (Penguin/Perigee; winner of the Books for a Better Life Award). He has published 57 articles or book chapters. His books have been translated into 15 languages: French, Spanish, Portuguese, Swedish, Finnish, German, Chinese, Bulgarian, Turkish, Korean, Indonesian, Italian, Croatian, Arabic and Japanese. He has appeared on Oprah (with his book Do One Thing Different), The Today Show, and a variety of other television and radio programs. Since 1977, Bill has given over 2000 talks around the world. He has been a top-rated presenter at many national conferences and was awarded the Outstanding Mental Health Educator of the Year in 2001 by the New England Educational Institute. Bill is a Licensed Mental Health Professional, Certified Professional Counselor, and a Licensed Marriage and Family Therapist. Bill is clinical member of AAMFT (and winner of the 2003 New Mexico AMFT Distinguished Service Award), certified by the National Board of Certified Clinical Hypnotherapists and a Fellow and a Board Member of the American Psychotherapy Association. He is known for his storytelling, irreverent humor, clear and accessible style and his boundless enthusiasm for whatever he is doing. His seminars are as entertaining as they are educational.

I thought the book had great points particularly for me to consider. It motivated me to get off my backside and start doing what I know I need to do in order to get where I want to get. It went through in a methodical order of how I can accomplish my goals, but it didn't mislead, telling me it's going to be easy. However, it did say it would be worth it if I was following my dream / bliss / love. I agree with that.

I would recommend this books. it's a quick read, but packed with all the right stuff. You just have to put it into practice.

(reviewed 10 days after purchase)
David DeRosa reviewed on May 17, 2010
(no rating)
A Lazy Man’s Guide to Success is an inspiring, eloquent, and thoroughly enjoyable look at the things that separate us from our life’s satisfactions. Bill O’Hanlon’s humorous way of pointing out the obvious should be required reading for anyone who has ever made an excuse for failure rather than examining the explanations for it.

Too many of us go through life remembering that we wanted to be, or to do, or to have..., and never look closely at the reasons we didn’t. The recipe for success is laid out in simple words; passion, pursuit, persistence. And, his approach is both engaging and motivating.

On a personal note:
I too am a wannabe songwriter, Bill. And, while I’ve got loads of excuses for my failure in this, I am inspired to try again. I’m looking forward to possibly hearing one of your songs.

You have subscribed to alerts for Bill O&#039;Hanlon.

You have been added to Bill O&#039;Hanlon's favorite list.

You can also sign-up to receive email notifications whenever Bill O&#039;Hanlon releases a new book.