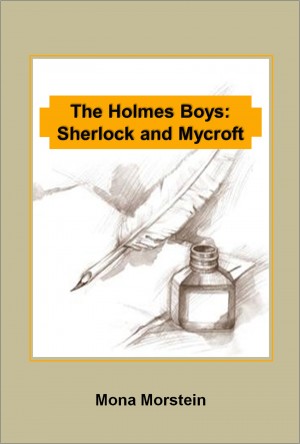 The Holmes Boys: Sherlock and Mycroft

By Mona Morstein
Rated 5.00/5 based on 1 review
This e-book, by agreement with Galde Press, contains the entire contents of The Childhood of Sherlock Holmes by Mona Morstein and first published by Galde Press in 2000. The book has been repackaged as The Holmes Boys: Sherlock and Mycroft. Morstein's original work was critically acclaimed. It is UCS PRESS' hope that this "repackaged" edition will widen the reading audience for this epic work. More
Very few clues exist in the writings of Sir Arthur Conan Doyle about the childhood of Sherlock Holmes; nor that of his older, smarter brother Mycroft. Not even Dr. Watson is privy to such information. So secretive was the brilliant detective Sherlock Holmes.

After the believed death of the famous detective, Josiah Cobbett, a reporter for The Guardian, begins the daunting task of discovering and documenting the childhood of Sherlock Holmes.

Cobbett discovers far more than he’d ever bargained for. He doesn’t even have a clue about where the legendary sleuth lived as a child. And when he gets that clue from a former Baker Street Irregular, Wiggins, that leads him to the area in rural, Victorian England where the once proud Holmes family had lived, Cobbett hits a wall of silence, compounded by mysterious deletions of Holmes family history.

Far more questions than answers arise. But Cobbett, ever the newshound, finally finds the one man who knows the whole story of the Holmes family – 84-year-old, long-retired butler Percy Brewster. The old man tells a tale blended with triumphs and tragedies. He reveals events that answer many questions about how Sherlock Holmes was molded into the world famous detective he became.

Cobbett poises himself to accept the world acclaim and fortune he knows will come his way upon publication of what he’s discovered. But, as already noted, Josiah Cobbett discovers far more than he’d ever bargained for.

Known as Mona Morstein in the Sherlockian world of devoted Sherlock Holmes fans, and Dr. Morstein as one of North America’s leading naturopathic practitioners, the author equally excels in medical and literary realms.
Dr. Morstein has been a naturopathic doctor for nearly two decades. She earned a Summa Cum Laude BS in Foods and Nutrition from Arizona State University in 1984. She graduated from National College of Naturopathic Medicine in 1988, where she was class speaker at graduation. She then did a year’s residency at NCNM in Family Practice.
After her residency, Dr. Morstein moved to Great Falls, Montana. Having attained a respectable position in the field of naturopathic medicine, in 2002 she was asked to join Southwest College of Naturopathic Medicine in Tempe, Arizona. Dr. Morstein is Chair of Nutrition at SCNM. She teaches three nutrition courses and is the professor for gastroenterology. She also supervises students seeing patients at Southwest Naturopathic Medical Center, the out-patient clinic associated with the school, and has a small private practice of 16 hours a week. Her web site: http://www.drmonamorstein.com
A frequent lecturer in the United States and Canada on diabetes and gastroenterology, she has appeared on regional and national TV programs.
She became hooked on Sherlockian literature in 1996, and her first book, published in 2000 by Galde Press, was The Childhood of Sherlock Holmes, critically acclaimed for its originality, classical 19th century literary style, and for providing answers about the events that helped mold Sherlock Holmes into the world’s most famous detective.
The author has an eclectic background. She has bungee-jumped, parachuted, scuba-dived, and earned a karate black belt in Japan. She hikes, is a bibliophile, and a member of HOUNDS email group.

Reviews of The Holmes Boys: Sherlock and Mycroft by Mona Morstein

I thoroughly enjoyed this book. It is a very well written story and one that is hard to put down. I would definitely recommend reading this book.

You have subscribed to alerts for Mona Morstein.

You have been added to Mona Morstein's favorite list.

You can also sign-up to receive email notifications whenever Mona Morstein releases a new book.