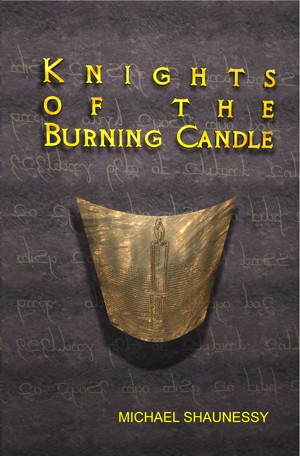 Knights of the Burning Candle

By M. Shaunessy
In a world where dragons rule the air, thieves stalk the forests, and vampires that haunt the night, there those who keep evil in their place. The Knights of the Burning Candle, led by a widowed elf Kizment, she and her guild members must help protect the peaceful land of RhyDin from an evil guild who purpose is to rule the world.

This book is in its 3rd Edition

Born in a hospital just outside of Livingston New Jersey, Michal grew up in a suburban life during the late 70’s through the early 90’s. He started his writing in high school writing about science fiction and fantasy. As he entered in a small community college in Randolph, Michael expanded his writing abilities as well as computer graphics skill hoping it would provide his future. After years of finding a publisher, he’d knew it wasn’t time to release his first work.
In ’04, Michael and his family moved to a quaint town in Washington, Georgia as his parents opened a bed and breakfast. Michael returned to writing as he went back and reworked his book. He soon found out from a friend that a new website, dedicated to independent writers and authors, he soon will get his first book published.

You have subscribed to alerts for M. Shaunessy.

You have been added to M. Shaunessy's favorite list.

You can also sign-up to receive email notifications whenever M. Shaunessy releases a new book.