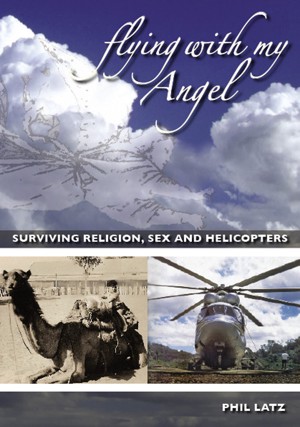 Flying With My Angel - surviving religion, sex and helicopters

Phil, was born in a church Hostel in isolated Central Australia - no doctor there. He grew up on a Lutheran Mission in desert isolation with Aboriginal friends and ate snakes, lizards, grubs & ants. He survived penny-less Church boarding school life after a 3 day, 1000 mile steam train trip. Then various different apprenticeships, underground mining, a broken heart and love affairs. Persistence saw him morph into a world-wide chopper mechanic/pilot/manager. The media declared him dead at various times but his `angel' saw him through.
Religious problems and skiing in Europe were followed by a society wedding in England, living/working in countries from Fiji to UK, before divorce occured. Phil was involved with con-men, suffered near ruin, and saw corruption in many countries. He describes his amazing, `paid to see the world' life in frank detail and shows examples. Further info & reviews are on his website & at Amazon.

Reviews of Flying With My Angel - surviving religion, sex and helicopters by Phil Latz

What an excellent story! Encompassing white knuckle helicopter flying adventures and a unique reflection of Australian Social History it kept me reading - I just couldn't put it down. I highly recommend Flying With My Angel - surviving religion, sex and helicopters to anyone, helicopter pilot or not, but for the latter it's compulsory reading!

You have subscribed to alerts for Phil Latz.

You have been added to Phil Latz's favorite list.

You can also sign-up to receive email notifications whenever Phil Latz releases a new book.