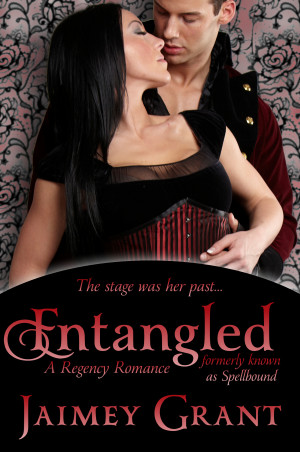 By Jaimey Grant
Rated 3.60/5 based on 5 reviews
England 1820.
Due to one too many mistakes on her part, Raven Emerson is forced to retire from the stage. Out of pure boredom, she agrees to pose as an eccentric duke's betrothed. Lord Windhaven hires her because he's tired of his family's interference. She's risking her life, he's risking his sanity, but they're both risking their hearts. More
A retired actress...
Raven Emerson made a name for herself treading the boards. But things change and one mistake too many forces her to leave the stage. Unfortunately for Raven, retirement is boring.

An eccentric duke...
Lord Windhaven finds himself the center of his family’s matrimonial ambitions. An insane idea takes root, prompting him to approach an actress to seek her aid in thwarting his family’s plans.

Reviews of Entangled (formerly known as Spellbound) by Jaimey Grant

it has good twists and turns and is worth reading.

This regency romance is one of a few interlocking romances. As a standalone read it works well although there is a sense of walking into the middle of where a previous book left off. The main character, Raven, is well drawn.

Spellbound by Jaimey Grant is a captivating regency romance novel that sweeps the reader up into a tale of love and deception. This compelling drama involves a young actress named Raven who accepts a job to play the role of a rich duke's fiancée, all the while knowing that if her real identity is uncovered she will be executed. The duke's goal is to use Raven to assuage his family's relentless pursuit to see him wed to a wealthy heiress. At first, Raven takes to her role with cunning efficiency. But trouble starts to brew when she finds herself passionately falling in love with the duke--an event which will send her life spiraling out of control and tumbling towards disaster.

What I most admire about this novel is Grant's ability to bring her wonderful characters to life with an undeniable wit and pomp. The prose is fluid and the dialogue accurately conveyed, fully immersing the reader in the periodic English setting. Grant truly understands her genre and flourishes with every word she writes. For certain, I will seek out more books from this author fully anticipating another richly told romance teeming with charming characters and an involving plot.

I read this recently.

Now I have to admit, the genre, Regency romance, is not something that I habitually read. Well, to be honest, it's not a genre I've ever read.

I have to say, I was pleasantly surprised. It was a lot better than I was expecting. The protagonist, Raven, was someone I took to immediately. There was an admirable supporting cast of eccentrics, Regency fops, nobility in various shades of good, evil and torment, and a good story line. It's not a genre I could relate to, but I was hooked and made to care about the ultimate fate of Raven. All the characters were believable and well-realized. There were sub-plots and red herrings in abundance, and the dialogue was often snappy, believable and witty.

The book was also proofread and edited with very few mistakes that I noticed.

I have to admit I got confused at the late introduction of the nemesis, but overall, I thoroughly enjoyed it; much more than I was expecting.

So I am happy to award this a 3 star rating. Nice one, Jaimey.

Regency author Jaimey Grant has done it again with "Spellbound." In this novel, Ms. Grant has brought more of her interesting (and interconnected) characters together in a plot filled with intrigue and suspense.

In this tale, Tristan hires a retired actress, Raven, to pretend to be his fiancee so that he can stop his grandmother's nagging at him to get married. Needless to say, they fall in love despite themselves, but (as the saying goes), the course of true love ne'er did run smooth. There are obstacles to be overcome and intrigues to resolve.

Ms. Grant's characters are well-drawn and believable, and I particularly like seeing minor characters from another of her tales being given an opportunity to tell their own stories in each book.