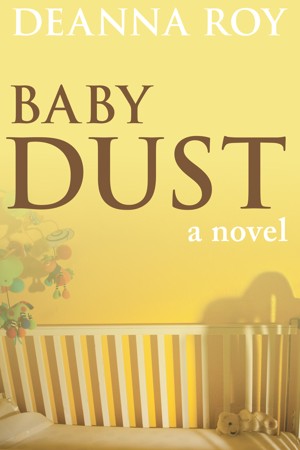 Baby Dust: A Novel about Miscarriage

By Deanna Roy
Rated 5.00/5 based on 1 reviews
Baby Dust sheds a light on the all-too taboo subject of miscarriage in a raw, compelling, and incredibly realistic way. -- Kristin Cook, Founder of Faces of Loss, Faces of Hope More
The five women sitting in the circle of chairs all had great dreams of motherhood.

Then their babies died.

Melinda sees blood on the floor every day after her loss. Dot believes the wrath of God caused her baby to die. Teenage Tina is trolling internet dating sites for a father for another baby, and Janet's failure to cry means her wedding is off. Stella, the support group leader, must help them while facing the old choices that cost her ever having a family of her own.

Based on the stories of dozens of real survivors, Baby Dust is a moving tribute to the strength of mothers who must endure this impossible loss.

"Absolutely stunning, compelling, and unlike any other book related to pregnancy loss that I have read."
-- Robyn Bear
-- Founder of National Pregnancy and Infant Loss Remembrance Day

"Baby Dust sheds a light on the all-too taboo subject of miscarriage in a raw, compelling, and incredibly realistic way. Women who have experienced a loss themselves will surely resonate with the characters in the book."

Deanna Roy is a writer and photographer in Austin, Texas.

Her short stories have appeared in several literary magazines, including 34th Parallel, Farfelu, and The First Line. Her writing credits are lengthy due to her background in journalism and freelance, but one of her favorite articles is a humorous piece about skydiving, published by The Writer in March 2009.

After suffering her first miscarriage, Deanna began the web site PregnancyLoss.info. The pages get over one million unique visitors a year, although it is her fondest wish that no one would ever need to come at all.

In October 2011, her novel Baby Dust will be released out into the world! You can also find her Facebook memorial page for babies lost to miscarriage or stillbirth on Facebook (A Place for Our Angels.)

Baby Dust Book Trailer
We are only just beginning to see the tide turn toward grieving mothers being able to speak of their babies. Baby Dust is a novel that explores the lives of women affected by these losses. Learn more at http://www.deannaroy.com/babydust. Join the Illuminate class online to share your grief through photography at http://illuminate.beyoungphotography.com. Light a candle for your babies on October 15

Sometimes tough to read but definitely a page-turner! I appreciated Baby Dust ~

You have subscribed to alerts for Deanna Roy.

You have been added to Deanna Roy's favorite list.

You can also sign-up to receive email notifications whenever Deanna Roy releases a new book.