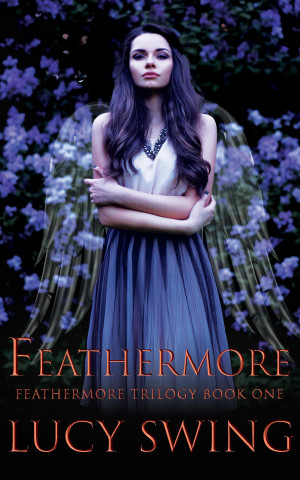 Lucy Swing is a YA PNR and Fantasy writer whose earlier works include The Feathermore Trilogy, and Bloody Valentine - a novella. She lives in sunny Florida with her hunky firefighter husband, and their four kids.

Ms. Swing is an avid reader, and a total book hoarder. Music is her muse, and must have a playlist ready for every book that she writes.

It was really good. Highly recommend!

Jade is your typical highschool girl. She is a normal teenage girl or so she thinks. That is until something tragic happens in her life and her world is turned upside down. She starts hearing voices that seem to be warning her of something or someone. On top of that she starts having dreams. Her two best friends are more than just friends they are there to protect Jade from demons and those that want to harm her. In this YA paranormal book you get love, heartache, angels, demons you get drawn into this book. Lucy is a terrific writer. The ending has a HUGE cliffhanger and makes me want to read more. I wonder what is going to happen next.

I really enjoyed this book. This is one of those short reads that won't really take you that long to read, but it will be totally worth it! It starts off by you meeting Jade, a teenager living a seemingly normal life. She has her best friends, she might be a little bit at the bottom of the social ladder, and a perfect target for the queen bee at the school. And then later the queen bee's nemesis when Jade captures the attention of the new student who's also hopelessly handsome, Avan. I could really relate to Jade and her everyday life. Well, before all the supernatural things started happening.

I also loved the supporting characters, Claire and Nate, because they were there for Jade the entire time and they really wanted the best for her and tried to look out for her. In the end I was really upset at what they did, but that was all part of the book and quite necessary. I still really love their characters, but I felt bad for Jade because of what she went through during that last stretch of the book. It was literally like she lost everybody she'd ever cared for.

I really liked Avan in this book because of how caring he seemed and he was a great love interest. He and Jade seemed like a really great pair together, and Avan's that type of guy that would do almost anything for a girl he really cares about, and maybe even loves. I'm pretty sure he actually did in end. I read this a few days ago, and I can't remember the specific details of the plot, but enough to write a review with my praises and complaints. But don't worry, the complaints in here are very minimal.

One of my complaints were the plot holes. I was a little confused at parts and some of the plot events weren't that well portrayed, but that was only at one or two parts, although at a more important part. one example was how Jade was a fallen angel. It was explained, but not fully, so I was a little confused at how everything about that really worked out. But, the rest of the plot was really great and everything was extremely well-written. The whole plot of the book flowed smoothly, except the one or two small sections I mentioned. It was really easy to get absorbed into this novel.

The ending was so tragic! I wanted to throw my Kindle across the room, but then I remembered how stinking expensive the thing was so I satisfied myself by throwing a pillow at my brother. (I know, I'm a great sister, right? But he threw one back at me, so we're even!) I can't wait to read the next book now because that cliffhanger was brutal and I was devastated by the ending. This book was like Lauren Oliver's Delirium in a way because of what the ending was like. Fans of her books will definitely enjoy this one.

You have subscribed to alerts for Lucy Swing.

You have been added to Lucy Swing's favorite list.

You can also sign-up to receive email notifications whenever Lucy Swing releases a new book.