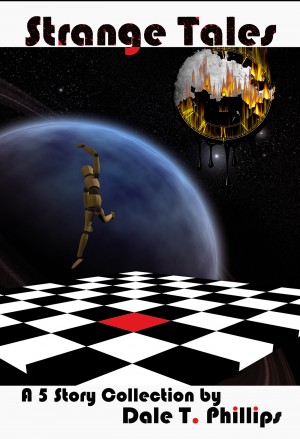 By Dale T. Phillips
Rated 4.00/5 based on 2 reviews
Here are five tales of people going off the beaten track of reality to experience something completely new and unwordly. Stories of individuals in pain who ride a rollercoaster of odd happenings that show life in a different perspective. People running to something or away from something, or finding something unexpected. More
These are stories of magic realism, places where mundane occurrences mix with myth and magic to turn life inside-out, where anything can happen. Gone is the workaday world of knowing the beginning and ending, or of a sound, sane, sedate frame of reference. Since we see as through a glass darkly, we sometimes have metaphysical questions which cannot be answered in the usual sense. Only through an alternate strangeness can we more clearly understand why we go on.

Here we have seekers and avoiders, and a young traveler who encounters a modern marvel in an ancient ruin. A group of youngsters in a Lewis Carroll-like tale, where language and logic are stretched and reshaped into a tongue-twisting, whimsical adventure.

Sit back and give your mind a break from the worries of today, and get away to a world of wonder.
Available ebook formats: epub mobi pdf rtf lrf pdb txt html
First 15% Sample: epub mobi (Kindle) lrf more Online Reader
pdb
Price: $2.99 USD
Buy Add to Library Give as a Gift
How gifting works
Create Widget
Tags: short stories magic realism
About Dale T. Phillips

Definitely worth a look. My favourite was The Cats of Athens, but I was intrigued by The Great Snipe Hunt, which I can only describe as experimental literature. All five stories held my attention right from the first sentence through to the final word.
The book is a nice mix of stories each angled around reality just being a fraction off-key, which is enough to unsettle the key character in each case.

If you're looking to dive into something off-beat and bizarre, then Strange Tales by Dale T. Phillips might be for you. The five tales in this book are guaranteed to take you to places you've never been.

Phillips begins with Roadside Attraction, the tale of a man named Guy in the midst of fleeing his past. Guy is driving across the country with no destination in mind - he simply wants to get away - when exhaustion and the need for gasoline force him to stop at a roadside service station. He quickly discovers that he's stepped into another reality, and that he's about to be presented with a choice.

The Snipe Hunt is an unexpected, lyrical jolt into the childhood mind of yesteryear where anything is possible, and the powers of belief manifest themselves in unexpected ways. Phillips displays his skill with language here, using plays on words and a fun voice that made me smile. It provides an oasis of sorts in a work that certainly has its share of shadows.

The Tree of Sorrows is a bit of a moral tale about a man standing on the Golden Gate Bridge and contemplating suicide. When a stranger emerges from the fog and offers him a deal, he's inclined to take it. There's a price of course, but what does he have to lose?

Phillips blends science fiction and mythology in The Cats of Athens. Jim has expected more culture and less modernism in Greece, so he ventures into old neighborhoods that echo of the past. When he rescues a cat from a gang of street kids intent on killing it, a seemingly minor event, his vacation takes a bizarre turn. The cat isn't what it seems, and it has a tale to tell.

The Watch of the Yellow Eyes begins like a Stephen King novel. A man escaping the loss of his wife moves into a house in coastal Maine with his dog, Marvel. A fall from a nearby cliff and into the Atlantic offers him an easy way out of life, but when he begins to see eyes in the dark, he's forced to reconsider his options.

For me, the defining theme throughout Strange Tales was its flirtation with morality. Phillips does a nice job of bringing up issues that speak to the human condition, while simultaneously walking the line between what constitutes reality and what is only perceived to be reality. Whether its choosing to ignore our nature because it's easier that way (The Cats of Athens), or being careful what you wish for (The Snipe Hunt), or discovering your inner strength in unexpected ways (Roadside Attraction, The Watch of the Yellow Eyes, & The Tree of Sorrows), this book will take you on a journey brimming with unexpected light and looming shadows.

You have subscribed to Smashwords Alerts new release notifications for Dale T. Phillips.