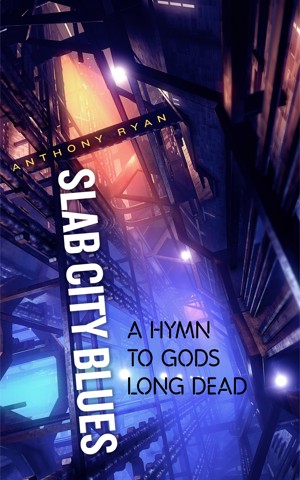 Anthony Ryan and these novellas are like if you put William Gibson and Neal Stephenson in a dark room with no light and gave them guns with hot loads but no scopes or IR, adding monsters with big fangs and gigantic claws and bulging muscles and told William and Neal - be out in alive in twenty minutes and then shut and locked the door. Imagine Neuromancer with teeth and claws, or Snow Crash with a serious edge, you'd have Anthony Ryan.

This last novella of the three, is at least twice as long as the other two. You can tell by the way the story was developed and how much more you got out of it that this didn't make Ryan sloppy, it just made him use his wonderful talents at a longer story. His style is still wordsmithed, terse and sbrupt - no extra words at all - completely clean.

THE PLOT: Inspector McLeod is on suspension for trying to throw a perp out an airlock in front of witnesses. His partner stopped him, or it would be Murder II. So, he bartends at the bar Madame Choi left him when he feels like it. In walks this gorgeous blonde vampire, who says the word "DeMarco", and "I need your help, contact info is on the back," then she walks off. Later he gets an anonymous message on his Smart (phone, tablet, assistant, everything else you want)that says "listen to the vampire". So he closes the bar down early, and looks at the back of the disc which reads, Dr. Janet Vaughn, Classical Studies, Faculty, Lorenzo University. Now what would a Classics Professor Vampire want with a suspended Demon? But McLeod remembered the DeMarco case. It was gruesome. A rich man, he was kidnapped off the Pipe (mass transit)in the middle of his bodyguards and no one saw him. Later, he turned up in pieces in a 50 gallon drum at his own facility after being put through one of his own machines. It was too gross. There were no suspects after all this time. So he went home and read Janet's notes. She believed this was not an isolated murder but a killing spree, all related to the old gods. This is when things get interesting. Does Janet's theory hold water? Does McLeod believe her? Can he make the Demons believe her too? Can he get his badge and gun back so he can solve the case? Are they missing something? Will more people be killed? Can a Vampire and a Demon find common ground to move ahead and do something meaningful together?

CHARACTERIZATION; The characters in this novella were either victims, families of victims, Demons or Dr. Janet or MEC personnel. Dr. Janet is something of an enigma, sharing nothing of her past, she is bright and cheery, clearly brilliant and can be deadly dangerous as parts of her morph into bits that turn into other things that save McLeod's life at one point in time, though she won't explain it. While the MEC personnel were supposed to be like clones, they were as different as night and day when it came right down to it, and exhibited personality features, quirks, foibles, and psychological traits that showed each one to be an individual. Even the dead victims came to life as their lives were examined by the Inspectors looking for anything that could help them. The perps were the same way as the dead. The Demons were investigating their lives looking for clues to their guilt or innocence, and by doing so, they became full fledged people, in detail. The one character we knew the least about was Dr. Janet, and McLeod's partners, girlfriend named Sam, who did therapy with kids.

PACING: The pacing in this book is just as breakneck as the others. This one grips your lapels and drags you through the pages, so don't kick or scream, you'll just damage yourself, go along with the ride. All 126 pages flew by like they were nothing. The story seemed like it was merely a few pages nothing more. There were no slow spots, no dead spots, not even any slowing down at all, just an e-ticket ride - right through the whole novella. You are riveted to the story, simply riveted, wondering what will happen to McLeod and Janet as well as who will be next and why.

THE ENDING: The ending of the story was a total surprise, I never saw it coming. I would never have guessed it in a month of Sundays. I felt like one of those people in the drawing room gaping at Sherlock as he expounds on how he solved the case, bit by bit. How he put two and two together and got four, when I couldn't even find two to begin with. It was a perfect ending to a pefect story. They went together like Lucy and Ethel, like Theresa of Avila and God, like single malt and ice. It was neither too fast nor too slow. It was perfect, and left room for more Slab City Blues novellas, which I'm assured by Ryan are coming. This is such good news, I could jump for joy, and since I live on a ranch, no one would hear me except the horses.

I would recommend this book to people who like William Gibson and Neal Stephenson with a bit more of an edge. I would also recommend it to people who like police procedurals, murder mysteries, science fiction, and thumping good reads. Anthony Ryan is the real thing. An author who can not only write, but bust genres with one hand tied behind his back. If you removed the spliced and the orbital, and put it in the modern day, it wouldn't have the edge, but it would be a murder mystery / police procedural of the typical sort. You'll be able to find this one at all the usual places. Go buy it right away before somebody finds out just how good Ryan is and gives him a great big contract, than instead of .99 this novella will be $3.99 or more. Good luck Mr. Ryan!