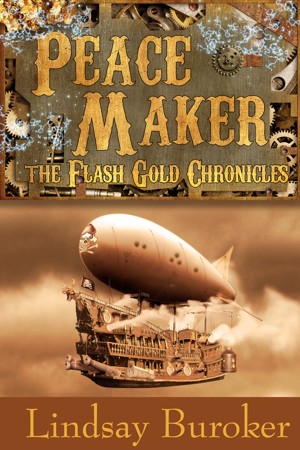 By Lindsay Buroker
Rated 4.88/5 based on 8 reviews
Half-breed tinkerer Kali McAlister doesn’t care that the gold rush has stormed into Dawson and prospectors are flooding the north—all she wants is to finish construction of her airship, so she can escape the Yukon and see the world.

Unfortunately, the world keeps chucking wrenches into her machinery: a mysterious gambler is pumping her for information on her... More
Half-breed tinkerer Kali McAlister doesn’t care that the gold rush has stormed into Dawson and prospectors are flooding the north—all she wants is to finish construction of her airship, so she can escape the Yukon and see the world.

Unfortunately, the world keeps chucking wrenches into her machinery: a mysterious gambler is pumping her for information on her bounty-hunting business partner Cedar; the notorious gangster Cudgel Conrad is after Kali’s knowledge of flash gold; and a series of gruesome murders is plaguing Dawson. Someone—or something—is ruthlessly slaying tribal women, and, if Kali and Cedar can’t find the killer, she might be the next target.

About the Series: Flash Gold

A steampunk adventure set in the Yukon during the gold rush.

The third and final book in the Flash Gold Chronicles (so far, at any rate) sees Kali intent on making an airship so she can escape from Dawson City and the cold of the oncoming winter. The gold rush is in full flow, and the forests around are being denuded - there's not much around to see them through to the spring. Kali is an engineer - but in a steampunk world, engineering is a little different from what you might expect of the historical gold rush era.

Kali takes her bounty hunter beau on a search through the forest on her SAB - a self-automated bicycle, running on steam power - on the trail of a human monster killing native women in a horrible manner. She's diverted by a pirate attack from an airship, and thinks what a great idea it would be to get rid of the pirates and salvage their airship - thus saving herself months of work.

Well, it's not quite as easy as that, and between meetings with differtent people who each want the other one taken out of the way for various reasons, Kali eventually finds herself back on that airship, in a life or death situation for more than herself.

Peacemaker follows the first two books, Flash Gold and Hunted, rounding off the story reasonably well, but with plenty of scope for further adventures. I was just thinking there was too much near-romance and it had got a little slow, when WHAM the pace changed and it was a non-stop switchback of story telling all the way home.

I did stop to admire some beautiful phrasing:

A breeze scuttled down Main Street, swatting at a newspaper page too mired in the mud to escape, though it rattled and whipped in a valiant effort to do so.

“Are you sure you want to be that insulting,” Kali asked, fishing in a pocket, “considering I’m standing right behind you with—” she grabbed the first tool that she felt and pulled it out, “—pliers in my hand?”

I don't know if Ms Buroker has any plans for more in this series, but I know she's been hard at work on the Emperor's Edge series and other works. I've got a few of those nestling on my kindle app waiting to be brought out and read some time. We'll just have to wait and see if Kali ever makes it out of Dawson. I hope so. I want more Flash Gold!

Wow, I loved this one! This series is definitely growing on me. I hope the next installment will be out soon.

My favorite of this series. Kali is becoming more fun and interesting. I enjoy all of Lindsay's books and stories.

(reviewed 24 days after purchase)
Kelly Christensen reviewed on May 23, 2012

I hope the 4th book is published soon!! But EE4 will tide me over. And I still have Encrypted to read too :)
Can't get enough of Miss Buroker's writing!

Another great story. Love all Lindsay's books, but especially this series. Really looking forward to the next installment. Hopefully it will be as long as this one, but a full length novel would be really great!

Again a fantastic story from Lindsay. I love Kali and Cedar but am excited about new additions. I cannot wait until the next book and I love that Lindsay does not take forever to publish her work.

Great addition to the series, can't wait for the next one.