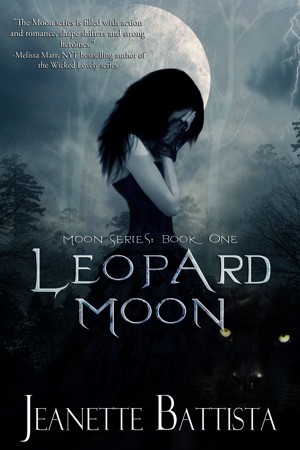 By Jeanette Battista
Rated 3.50/5 based on 2 reviews
"The Moon series is filled with action and romance, shape shifters and strong heroines."--Melissa Marr, NYT bestselling author of the Wicked Lovely series. Kess, a wereleopard, is forced to flee her home in Miami once her brother's obsession with her turns violent. She meets Cormac, a young man with a secret of his own. But her brother is closing in, threatening Cormac's life and Kess' freedom. More
How do you disappear when you come from a family of predators?

A wereleopard, Kess is forced to flee her home and family in Miami once her brother's obsession with her turns violent. She runs from city to city, trying to stay one step ahead of the investigators her family has dispatched to bring her home. Kess ends up in the mountains of North Carolina and attracts the attention of Cormac, a young man with a secret of his own. As she attempts to live as normal a life as her were-nature allows, her brother Sek continues to hunt for her. He believes she is the key to revitalizing their weakened clan and is driven to extreme measures to ensure their continued existence. As Kess' relationship with Cormac deepens, Sek closes in, threatening Cormac's life and Kess' freedom.

When the moon rises, the hunt is on….

Jeanette Battista is the award winning and Amazon best-selling young adult author of The Moon Series, These Violent Delights, and the Books of Aerie series. She received her MA in English literature with a concentration in medieval studies. She’d been a technical writer, a software release project manager, and a freelance educational writer. She’s taught college freshmen how to write and occasionally still talks writing with high school and middle school students.

Her household includes several humans and three cats, one of whom is missing an eye. He is unfortunately not named Odin, a choice that will haunt her forever. When she’s not writing, she’s having the crap beaten out of her in a ring during Muay Thai class, reading anything she can get her grubby hands on, and playing Unstable Unicorns. She lives and works in North Carolina.

Leopard Moon Trailer 1
The first trailer for the Moon series.

Also in Series: The Moon

First, I would like to thank Ms. Jeanette Battista and We ♥ YA Books! for a copy of this book...

Honestly, I really don't know what I will say about this book... It was not boring but it was not that interesting... I mean the book is good but for me the story did not catch my attention... Though Ms. Jeanette wrote the story in a nice manner, there were some parts where I got bored... And I think all will say that the cover looks like Fallen by Lauren Kate but still there were some differences... Finally, I can't really say that I will recommend this book to others...

*4 stars * It took me two days to finish. It was compelling and fun, but at times a bit too dragging. A little too much time was spent on various descriptions or just characters wandering and thinking aloud.

From the first chapter on the book looked really promising. The author took time to introduce the characters. It really helped me to get into the story. We are introduced Kess, a were-leopard, who for the past year and half has been running from her family. Or more specifically, her brother. Sek was a wonderful villain. He was so obsessed with his ideas, he ceased to believe in everything else. It was almost sad. There really was no chance for him. For some reason I enjoyed seeing him combine his almost child-like belief and calculating clan-leader moves.

I've read plenty of other shapeshifter stories, but I've never run across were-leopards or were-bears for example.The tension between species and were wars were a refreshing change for a werewolf VS a vampire.

The wolves were sweet. Even though each and every one of them seemed to be huge and hot and perfect. They were so carefree, fooling around and keeping together. Like a wolf-pack. Almost the exact opposite to Kess's feline family. I really like that the author decided to play on the polar differences and preferences of cats and "dogs".

I was so glad, that for once there was no love triangle. I've almost tarted to think, that a good romance needs a condemned third wheel. The romance was clean and simple. Both had tried dating, but hadn't clicked well with anyone yet. It wasn't a marriage at first sight. It seemed natural, not forced. Finn with his inability to stay away from females and his special restrictions in the Barn made it hilarious. Big hugs to Finn. He's such a sweetheart.

The telling point was also done well. It shifted between different characters, yet always staying in third-persons view. I've recently run across only first-person stories. This book made me discover, I actually prefer that type of narrative. First person view might help you to better identify with the heroine, but the third person made the whole story flow more easily.I'm tired of endless inner monologues on theme "should I leave or should I stay?"

And lastly, there's the cover. *sigh* It really isn't half that bad. But why, oh why does it have to be THAT cover. Of all the possible pictures out there. Oh well. From the editors side it was good job. I didn't notice any major spelling mistakes or grammatical errors. Paragraphs were clean and nice, the font readable. Grudgingly I have to accept, that even the cover is good. I do recommend it to anyone looking for a good paranormal shapeshifter romance. Quick paced and fun with lots of likeable characters.

Now I'm on to the second book in Moon series, Jackal Moon. Let's see where the road takes Kess, Cormac and Sek.

You have subscribed to alerts for Jeanette Battista.

You have been added to Jeanette Battista's favorite list.

You can also sign-up to receive email notifications whenever Jeanette Battista releases a new book.