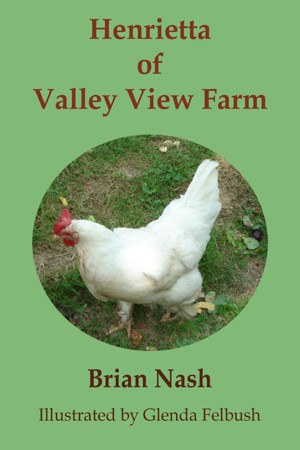 By Brian Nash
Rated 4.75/5 based on 4 reviews
Henrietta the white hen is famous for her eggs. Midnight is an adventurous black kitten who dreams of glory. After Henrietta rescues Midnight from evil rats who threaten him when he gets trapped, she becomes famous for her bravery and strength, as well. This lively tale, suitable for children ages 5-8, features farm life, friendship, and a wonderful cast of believable animal and human characters.

Brian K. Nash was born in 1961 and grew up on a farm in Kansas. Blind from birth, he enjoyed the loving support of his parents and five siblings, who kept him active exploring the woods and riding horses. The many stories they told him and read to him fostered his love of fiction. He began composing his own fiction for children when his daughter Evelyn was small.

He edited the school newspaper at the Kansas School for the Blind. Later on, he received computer training and became an adaptive technician, teaching other blind people to use a computer. He has extensive public speaking experience, especially to groups of school children, seeking to educate others regarding blindness and the capabilities of the blind.

Henrietta of Valley View Farm is the first of Brian's several books for children that are being published by Smashwords. His lively, entertaining stories are set in a fictional place that has a lot in common with the locales he knew and loved as a child. The animals - chickens, cats, dogs, horses, birds, frogs, and many more - can talk to each other, and are among the most vivid of the many characters. They often have much to teach their human friends as they work together to overcome whatever challenges are thrown at them. Adventure abounds, and friendship always triumphs in the end.

This story has everything: adventure, drama, believable animal and human characters, a happy ending, and values that are taught in an entirely unpreachy way. I also think that children older than eight would enjoy it. They would surely enjoy reading it to their younger siblings! I like the fact that the book is not illustrated, except for the cover photo of a vigorous white hen who is a perfect match to Henrietta. That is, the vivid images in the story really encourage children to use their imaginations as they get caught up in the exciting story.

(reviewed 8 days after purchase)
Reginald George reviewed on May 9, 2010

I can't stop thinking about Henrietta. As a parent I want my children to read books about her because she's very entertaining and still manages to express the values I grew up with. The values I would want any child to have. My friend's 10 year old daughter loved it. Henrietta evokes that gentle feeling of peace and beauty in the tradition of books like all things bright and beautiful or Dr. Doolittle where animals are real and their hopes and dreams actually matter. Henrietta stays fresh and original by not trying to be trendy or full of gimmicks. The story could have been written any time in the last hundred years, and that's what makes it special. Give the chicken a try. I'm looking forward to her next adventure, and I'm not even a child.

(reviewed the day of purchase)
Ski Montana reviewed on May 8, 2010

Great story -- animated movie would be the icing on the cake for this author!

(reviewed the day of purchase)
Henry Livingston reviewed on May 1, 2010

I just found this brand new story. What a gem!!! An inspiring tale of a family of farm animals banding together to rid their farm of evil intruders. Fascinating characters and an tale that has great rhythm and teaches solid life lessons. Perfect for bed time reading. I can't wait for the sun to set. Keep it up Mr. Nash!!

(reviewed the day of purchase)
Susie Robertson reviewed on May 1, 2010
(no rating)
A delightful mix of charachters, I have numerous nieces and nephews and can't wait to share with them. Looking forward to more and especially a paper copy for Christmas gifts! Henrietta is a classic! Well done Mr. Nash.

You have subscribed to alerts for Brian Nash.

You have been added to Brian Nash's favorite list.

You can also sign-up to receive email notifications whenever Brian Nash releases a new book.