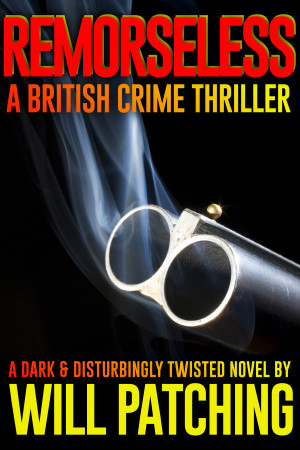 By Will Patching
Adult

This first tale in the pulse-pounding trilogy is dark and disturbingly twisted. Not for the faint of heart. If you like edge-of-your-seat suspense, sadistic killers, and heroes scrambling to stay a step ahead, then you’ll love Will Patching’s spine-chilling novel. More
A killer paroled. A tormented profiler. A blood-soaked quest for revenge.

Doc Powers is one case away from a complete breakdown. Grief-stricken over the death of his wife, his reliance on booze and drugs fills his life with startling hallucinations. As he battles his demons, his efforts to stay coherent fail to keep a cunning psychopath behind bars…

With a bloody trail of death spreading, Doc fears both he and his colleague are next on the killer's hit list. Fighting the visions that threaten to consume him, he must tap into the profiling skills of his past to put an end to the parolee's murderous rampage.

Can Doc overcome his past and match wits with a maniac before he becomes the next victim?

Remorseless: A British Crime Thriller is the first book in a pulse-pounding trilogy. This dark and disturbingly twisted tale is not for the faint of heart. If you like edge-of-your-seat suspense, sadistic killers, and heroes scrambling to stay a step ahead, then you'll love Will Patching's spine-chilling novel.

Buy Remorseless to plunge into an unflinching thrill-ride today!

Will Patching writes dark and disturbingly twisted crime stories that mix murder mystery, psychological suspense and intense thrills while offering unique insights into the darker side of human nature. His ‘pull no punches’ style and sparse but often brutal descriptive passages will not suit all readers, so if you are into cozy mysteries you might want to look elsewhere!

With complex plots and rounded characters, Will’s novels are necessarily longer than average, usually well over 100,000 words, so these are definitely stories designed for readers who like to really get their teeth into a good yarn!

Now considered something of an expert on psychopaths, thanks to his extensive research and personal experience of people with this personality disorder, Will set up a popular website to help lay readers understand these destructive individuals and why their existence is so important to society in general. Please copy and paste into your browser to visit the site:

Will’s writing draws heavily on this expertise but his novels are designed to entertain rather than educate – though many readers appreciate both aspects of his writing. He is currently working on completing two trilogies, though each novel is a self-contained story.

Will Patching was born and raised in ‘Sarf Lunnon’, Engerland, or at least, that’s how he pronounces it! Hence, many scenes from his novels are situated in London, the surrounding suburbs and other parts of southeast England, though they also span as far afield as Thailand and the USA.

His approach to writing is to hit the reader with hard truths about the world we live in, and his mysteries, thrillers, and suspense novels are designed to get your pulse pounding. One male reader decided he needed to check his door locks late one night while reading Remorseless and subsequently commented on social media:

Will’s eclectic professional experience – from his teenage role as a ‘gardener’ weeding sewage treatment filter beds, through flying a Hawk jet very fast, very low and very dangerously before the RAF realised and booted him out, then attending Harvard on a course for potential CEOs, largely thanks to the Peter Principle of promotion, and more recently, to building his dream, a charter yacht that sank in SE Asian waters – all have led to a rich and varied life, often reflected in his writing.

If you would like to know more about this indie author you might like to join Will’s Readers Group. You’ll also gain exclusive access to novel backstories, author insights, prize draws and more, including notification whenever a new novel is released. Please copy and paste this url into your browser to find out more:

Learn more about Will Patching

About the Series: The Remorseless Trilogy: Doc Powers and D.I. Carver Investigate 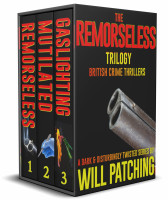 'British crime writing at it's best.'

A dark, gripping trilogy based in and around London, featuring forensic psychiatrist, Doctor Colin Powers, and his colleague, Detective Inspector Jack Carver.

Full length crime thrillers to get your teeth into. Not for the squeamish...

Reviews of Remorseless: A British Crime Thriller by Will Patching

Remorseless is a deep and dark look into the mind of a convicted killer. This specific killer was convicted of killing his parents in a brutal murder when he was just a teenager. He maintains his innocence and claims this his brother did it and framed him. He’s served 18 years of his life sentence but is up for parole. The book follows his parole hearing from his side and the side of the parole board. Especially Doc Powers, a clinical psychologist who’s wife has just died in a tragic car accident that he believes is his fault.

Remorseless was a kick in the stomach when you’re already down. It’s deep and dark and will make you question the legal system. With all of the media frenzy around the new Netflix show about a wrongly convicted murderer, this book will have you wonder what has to go wrong for someone to get locked up.

The look inside the minds of all the characters involved was absolutely fascinating. While I don’t normally read books like this, I may have to start. I’ve always been fascinated (like the author) with the inner workings of the brain, especially those of “cold blooded” killers and so-called “psychopaths.” Patching does a WONDERFUL job with the psychology and inner workings of every character involved.

Literally every aspect of this book felt important. Usually with a book this long, there always feels like some pieces were there to add something but you can’t figure out what. With Remorseless, every word, page, and chapter needed to be there. Patching is a force to be reckoned with in the British Crime Thriller genre.

Without giving too much away, the second half of the book is brutal and harsh and absolutely a blast to read/listen to. Patching knows pacing well, and paces the action scenes so that they feel realistic and will have you thinking about them long after you’ve closed the page. I found myself thinking about the thing within this book late into the night (thanks for that!) This book was both a page turner and a thought provoker. Usually page turners are full entertainment without much thought. And vice-versa, thought provokers are usually dry and without gusto. This book definitely has both.

Overall, I loved this book. The psychology felt super real, the struggles each character was going through were incredibly accurate and made you as a reader feel for them. Remorseless is definitely a book you should pick up and read. Just be warned, this will have you up late (either reading it, or thinking about it).

I was expecting this book to be good. I wasn't disappointed. It's good, a very good read all round, far superior to the vast majority of airport novels and the like which adorn the bookshop shelves. Well researched and a story well told. It starts at a brisk pace and speeds as it progresses, good old fashioned story-telling at it's very best. I am now in my sixties and the clock is ticking - consequently I am a grumpy old man and have little time for also-rans. This is not an also ran - I repeat - it's right up there with the very best.
My wife also read this book. It is rare that we both find a book which we both like and are sorry to have finished but Remorseless filled the bill for both of us.

Read it. You won't be disappointed.

You have subscribed to alerts for Will Patching.

You have been added to Will Patching's favorite list.

You can also sign-up to receive email notifications whenever Will Patching releases a new book.