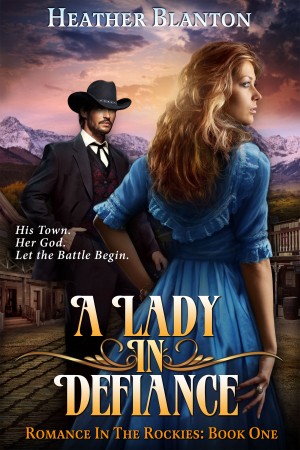 A Lady in Defiance

Charles McIntyre owns everything and everyone in the lawless, godless mining town of Defiance. When three good, Christian sisters from his beloved South show up stranded, alone, and offering to open a "nice" hotel, he is intrigued enough to let them stay...especially since he sees feisty middle sister Naomi as a possible conquest. But Naomi, angry with God for widowing her, wants no part of Defiance or the saloon-owning, prostitute-keeping Mr. McIntyre. It would seem however, that God has gone to elaborate lengths to bring them together. The question is, "Why?" Does God really have a plan for each and every life?

Written with gritty, but not gratuitous, realism uncharacteristic of historical Christian fiction, A Lady in Defiance gives a nod to both Pride and Prejudice and Redeeming Love. Based on true events, it is also an ensemble piece that deftly weaves together the relationships of the three sisters and the rowdy residents of Defiance.

Heather Blanton is the independent bestselling author of several Christian Westerns, including the Romance in the Rockies series, which has sold over 40,000 copies. Intrigued by the concept of three good sisters stranded in a lawless Colorado mining town, a few notable Hollywood producers have requested the script for her first book in that series, A Lady in Defiance. Heather’s writing is gritty and realistic. In fact, her books have been compared to AMC’s Hell on Wheels series, as well as the legendary Francine Rivers book, Redeeming Love.

A former journalist, Heather is an avid researcher and skillfully weaves truth in among the fictional story lines. She loves exploring the American West, especially ghost towns and museums. She has walked parts of the Oregon Trail, ridden horses through the Rockies, climbed to the top of Independence Rock, and even held an outlaw's note in her hand.

She writes Westerns because she grew up on a steady diet of Bonanza, Gunsmoke, and John Wayne movies. Her most fond childhood memory is of sitting next to her father, munching on popcorn, and watching Lucas McCain unload that Winchester!

She can be reached several different ways:

Christian Westerns is the genre that lets her write about strong pioneer women and men who struggle to find God and then live out their faith in real ways. Romance is always a strong element in her stories because it is such a beautiful gift from God, and a perfect reflection of how he loves His children: sacrificially and lavishly. Heather's stories aren't preachy or cheesy, but she hopes they are heart-warming, realistic, illuminating, and glorifying to God. Like good old fashioned Westerns, there is always justice, a moral message, American values, lots of high adventure, unexpected plot twists, and more than a touch of suspense.

"I believe Christian fiction should be messy and gritty, because the human condition is ... and God loves us anyway." -- Heather Blanton

This was a wonderfully written book. Definitely a new favorite!

You have subscribed to alerts for Heather Blanton.

You have been added to Heather Blanton's favorite list.

You can also sign-up to receive email notifications whenever Heather Blanton releases a new book.