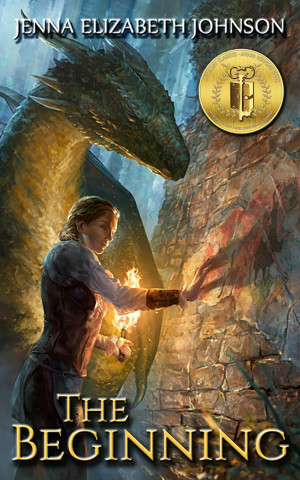 The Legend of Oescienne - The Beginning (Book Two)

By Jenna Elizabeth Johnson
Rated 4.00/5 based on 1 review
Twelve years have passed since Jahrra arrived in Oescienne and became the responsibility of the old Korli dragon Hroombra; yet much can happen in twelve years. So far, Jahrra's life has been filled with adventure, danger, friendship and even loss. Despite what she has learned in school and what she has learned from life, she has no idea that she is, in fact, human . . . More
A young heroine, a domineering dragon, and an ancient curse threatening their world... Epic fantasy at its best!

"This series, about a girl's life and role as a ward of dragons, rivals Harry Potter in scope. I loved it!" ★★★★★

Twelve years have passed since Jahrra arrived in Oescienne and became the responsibility of the old Korli dragon Hroombra; yet much can happen in twelve years. So far, Jahrra's life has been filled with adventure, danger, friendship and even loss. Despite what she has learned in school and what she has learned from life, she has no idea that she is in fact human, a child of the race that has been absent from the world of Ethöes for five long centuries . . .

But the girl's identity must be kept secret, even from Jahrra herself, for if the Tyrant King of the East knew of her existence all would be lost. And as time goes by those responsible for the young human girl grow anxious and cautious, for there is evidence of an unknown danger in their midst; a danger they cannot see or hear, but one they can sense like a bad omen.

As Jahrra continues to grow and learn about the world around her, facing personal dangers, challenges and enemies of her own, she will become aware of the prophecy that she is meant to fulfill and what she must sacrifice in order to survive what lies ahead.
Available ebook formats: epub mobi pdf lrf pdb txt html
First 20% Sample: epub mobi (Kindle) lrf more Online Reader
pdb
Price: $0.99 USD
Buy Add to Library Give as a Gift
How gifting works
Create Widget
Tags: adventure magic sword and sorcery dragons epic fantasy juvenile fiction quest eragon pottermore girl hero
About Jenna Elizabeth Johnson

17 years have passed since Jahrra was found and she’s spent half her life as the ward of Hroombra, an elderly dragon (who wears specially made spectacles to read his many books (loved that imagery!)). Her friendship with the witch/hag of the swamp Denaeh is still a secret from Hroombra and Jaax.

Denaeh is aware of the girl’s destiny and tries to give her clues of this, by sending her into a creepy area where she meets dangerous mythical creatures.

The dragons on the other hand try to prepare her for her future by sending her for combat training with an elven couple and by teaching her Draggish, the language of the dragons.

Jahrra (still unaware that she is human) is content with her life and her friends despite the ongoing torment by the other children at school.
Unfortunately that contentment is destroyed by the death of someone she loves dearly. This prompts the need for her to flee with Phrym, her pet semequin (type of horse) and under the protection of Jaax despite her continued dislike of him.

Delightful fantasy adventure tale. I deducted 1 star due to the grammar errors that could be corrected with proofreading.

You have subscribed to Smashwords Alerts new release notifications for Jenna Elizabeth Johnson.