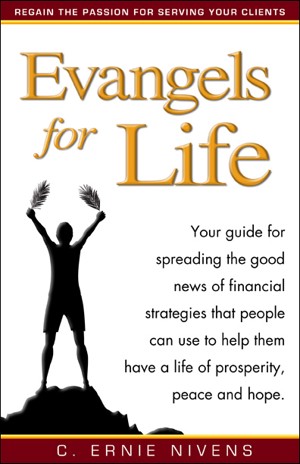 Evangels For Life: Why Passion Makes a Difference

C. Ernie Nivens hails from Rock Hill, South Carolina, where he graduated from Rock Hill High School. He entered the ministry with the United Methodist Church in 1970 while working his way through college. Nivens finished Francis Marion University, Florence, SC in 1976 with a BA is English. He then completed (along with his wife, Rosemarie) his M.Div (Masters of Divinity) from Candler School of Theology, Emory University, Atlanta Georgia in 1979 while serving a church on the weekend and working part time on a General Motors assembly line. He then served various appointments until 1989. During this time he served on two international church missions to the Fiji Islands and to Seoul, Korea and was a church consultant to many churches around the United States.

He retired from parish ministry in 1990 and began his career as a financial service professional. His hunger for education led him to complete his Masters of Science in Financial Services, MSFS, with the Accredited Estate Planner, AEP, in 2002. He has been a very popular speaker in hundreds of meetings within the industry. He has been associated the entire time with a major Mutual Life Insurance Company with over 10,000 agent/ representatives. He has finished each year’s production in the top 100 even the top 50 of 10,000+.

He has been married to Rosemarie for 44 years. They have three daughters, Cathy, Noelle, and Emily and three sons-in-law, Kevin, Bo and Jon. They are, also, very proud grandparents of five grandchildren, Eric, Matthew, Kristin, Justin and Ryan.

Reviews of Evangels For Life: Why Passion Makes a Difference by Ernie Nivens

You have subscribed to alerts for Ernie Nivens.

You have been added to Ernie Nivens's favorite list.

You can also sign-up to receive email notifications whenever Ernie Nivens releases a new book.