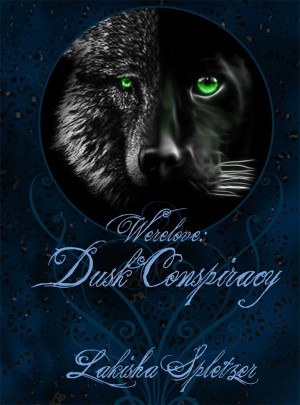 By Lakisha Spletzer
Rated 3.83/5 based on 6 reviews
Laylah Le Croix has everything and nothing. After an attempted kidnapping, she is rescued by Donil. Angry at her life, she makes a defiant choice that plunges her into the heart of a conspiracy. More
Seventeen-year-old Laylah Le Croix has a rich father, mansion, and servants. Yet she is lonely and neglected. Her father would rather work than speak to her. At the academy she is bullied and mistreated.

When Weres attempt to kidnap Laylah, she is saved by the mysterious Donil Silentshadow. Donil rouses feelings in Laylah that make her question her life and her father’s animosity toward her handsome rescuer. Confused by these emotions, she seeks answers from those closest to her and is rebuffed.

Where to start? Here are the basics.

She started writing stories and poetry at the age of 8 and hasn’t stopped yet. She has always been a writer, but becoming a published author took a lot of work and dedication.

That didn’t happen until after she left her home state of Virginia, and moved to Florida in 2004.

Finding time to write while being a full-time mother and school teacher, can be difficult but Lakisha always liked a challenge.

She learned to not let life’s many roadblocks and speed bumps throw her to the curb. She can’t wait to dive in and continue to share the stories swirling around in her head.

Official Book Trailer
One lonely teenager. One giant conspiracy. Will she ever learn the truth?

Believing this to be the second edition to the series I was disappointed to learn it was a re-edited version of the first book Midnight Relations, with a little more of the darker secrets revealed.

This version gives the reader a little more insight into the dealings behind the scenes of the main characters (Laylah’s) life, which unfortunately impact upon her.

Dusk Conspiracy ends in exactly the same way as the first book, Midnight Relations – with a jaw dropping cliff hanger and the reader wanting more.

This YA story features a world with shifters and humans. The lead characters are somewhat extreme. The heroine Laylah is a born victim held back by an utterly uncaring father. The villain is crazy. The ending is more of lull in the action, in anticipation of the next in the series.
The action goes at a nice pace.

When I first started reading the book I knew that there was going to be were creatures in it, but I was pleasantly surprised that it takes place in the future, thus combining paranormal and Sci-Fi in one shot in my eyes. The author balances the the elements well so that neither (SCI-FI or Paranormal)ever overpowers the other, and maintains it throughout the book. The characters were well developed although she throws a lot of them at you at first. It took me a while to get them all straight but once I became familiar with them, I settled in to the story.
Her story world is well thought out and cohesive, giving it a truly believable feel and tempo.
I found myself hating some characters, loving others and outright yelling at Donil. A reaction I am sure the author wanted to incite.
Overall 4 stars, Great work looking forward to starting on book 2.

Could you imagine not knowing if your father really loves you? Who you can and cannot trust? Well this is an everyday thing for 17 year old Laylah Le Croix. She puts up with this everyday of her life since her mother had died. Her mother died when she was 4 years old protecting her from Zina who wanted to kill her. After 13 years has passed Zina is still looking forward to getting her hands on Laylah. Zina tried to kidnap Laylah and failed, because Laylah was rescued by Donil Silientshadow. Donil makes Laylah feel things that she has never felt before for an man. Donil instantly knew when he saw Laylah that she was his future mate. Laylah is trying to figure out who she is and why her father hates Donil along with his family. Laylah is very a very bright young woman who does not know what she is, nor does she know that Donil is a were. Donil is the Alpha of his clan. He fights Zina just to save Laylah's life because he loves her.
Laylah learns how to stand up for herself and tries to fight for the one she loves. Laylah figures out that she can actually mind speak to other were creatures. This did not really surprise her at first, because she was too worried about Donil to think of anything else. She did not know that the wolf who was trying to help her get free was her own Uncle Stefan.
Lakisha Spletzer is an amazing author. This book is fast paced and a very much enjoyable read. I was so glad that I got to read this book and I am looking forward to read book 2. I recommend that everybody get this book and read it. I think that they will enjoy it very much. I know that I sure did enjoy it.

Book 1 really is about laying the foundation to the series. Lakisha Spletzer has written a solid book that has set the series perfectly. Making sure that the reader understands the book completely, the author provides background information at the end of the book.
The story is set in the future where the characters are either human or were. There are many weres on this canvas from wolves, bears, and rhinos to felines. Laylah Le Croix lives her life surrounded by secrets. Events are happening around her that she does not understand. Laylah doesn’t know that she is were or that her father is an alpha were. She was raised human per her father’s demands. Her father has kept her clueless by making sure she gets a dose of a drug twice a week that keeps her inner were from manifesting. When a group of weres try to kidnap her she doesn’t understand why she is being targeted. She is a target for attack because of who she is, the daughter of Henry Le Croix and Helena Le Croix. Henry made enemies when he married Helena. He is a wolf and she is a panther. Because of their union and the fact that Henry is a geneticist has one alpha female set on revenge. Zina tried before to bring Henry down. She killed his wife Helena but was unable to get Laylah. Now she is back and has her sites set on taking Laylah. Zina is one who doesn’t give up. She will stop at nothing to gain her prey, Laylah.
I like books that have great characters. This book did not disappoint me. To me a great character is one that makes you feel something whether it be good or bad. The characters in this story had me feeling all kinds of emotions. I liked Laylah for the most part but I hated that she was so beaten down emotionally. I understand that she didn’t know her true identity and her father was overbearing but she never stuck up for herself and when she did she backed down too easily. She has a great support in her friend Britta. Britta was sassy and kept reminding Laylah to find her inner strength and stand her ground. Laylah formed a bond with Donil, an alpha panther. Of course, she doesn’t know that he is a were. Donil’s goal is to ease Laylah into trusting him and then tell her about being a were. He believes that Laylah is his true mate. I had a problem with Henry Le Croix, Laylah’s father. He is just too much. He doesn’t love his daughter and places all these demands on her to be obedient. He neglects her and leaves her in the care of his staff. Since Laylah doesn’t know that she is a were and is surrounded by weres she doesn’t understand that alphas are obeyed no matter what. She just wants her father’s love. He is so busy working on the next great scientific discovery that will bring him more money and power. Jacques is the one assigned to Laylah as a guardian. In his inner thoughts we see his struggle to obey his alpha. He doesn’t like the way Laylah is treated but does nothing to help her. He sometimes treats her just like her father does.
The story had a lot of action. I liked that the story had an element of romance between Laylah and Donil but it didn’t over power the story. The story was more focused on the were aspect. Each character had a stake in the outcome of the story which leads nicely into the second book. Different characters with their own agendas made for a very interesting plot.

This is the second book by this author that I have read. I enjoyed this one as much as her first debut novel. It is full of mystery and action. It is also a fast paced book. I would highly recommend to sci-fi and paranormal readers alike.

You have subscribed to alerts for Lakisha Spletzer.

You have been added to Lakisha Spletzer's favorite list.

You can also sign-up to receive email notifications whenever Lakisha Spletzer releases a new book.