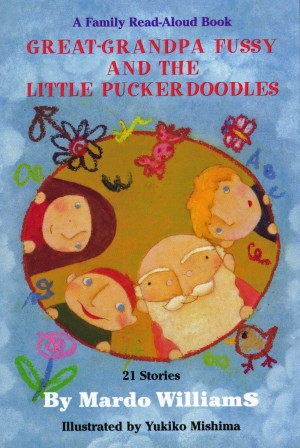 Great-Grandpa Fussy and the Little Puckerdoodles

By Mardo Williams
Rated 5.00/5 based on 1 review
They’re noisy, nosey and bossy—these little Puckerdoodles who have ensnared the heart of Great-Grandpa Fussy. Teenie, Weenie, Waddles, and Toodlebug range in age from newborn to age 6. In Great-Grandpa’s eyes they are unpredictable imps whose ingenious questions demand answers that only he can provide.
Twenty-one stories and 64 four-color illustrations for ages 5 and up. More
“Great-Grandpa Fussy and the Little Puckerdoodles is an enchanting storybook. Twenty-one stories delight readers with subjects from make-believe to losing teeth to new babies. The Puckerdoodles are funny, colorful characters and the family stories are light and playful. The book is perfect for reading a single story each day either in class or at home. One reader did note, however, that she could not put it down!”-- Kathleen Kain, Ph.D., Children’s Educ Co-op

“The adventures of three little ones and their family are accom-panied by action-filled, charming illustrations. The relationships of great-grandad, mother, father and siblings are detailed in everyday activities. The 21 short adventures contain topics school-aged children can relate to. The stories are great for bedtime and give younger readers a sense of continuation.”—MTM, Children’s Book Review Service

"The stories are rich in their very simplicity. Yukiko Mishima's illustrations reflect the same masterful ‘simplicity.’ The stories tell of many adventures, both entertaining and instructive. But best of all they provide a secure place that offers the reader good cheer and gentle affection."
--Kathy Piper, Professional Puppeteer, Past-president of The Puppeteers of America

“It’s a fun, family read-aloud book. The names of the characters are sure to bring giggles galore. The delightful illustrations simply enhance the 21 heartwarming stories.” Victoria Grimes, Today’s Family

"Lots of laugh and dabs of philosophy celebrate the unique bond between children & their great-grandparents. Yukiko Mishima's enchanting illustrations are a joyous & colorful addition & bring the stories to life." --RebeccaReads.com

"These are adorable, funny, interesting stories and beautifully illustrated. Yukiko Mishima has a whimsical flair to her drawings and wonderful use of color. I intend to make a gift of Great Grandpa Fussy and the Little Puckerdoodles to several of my best friends (who are first time Grandmas)." --Sharon White, Expectant Grandmother

"A delightful collection of short stories perfect for naptime and bedtime reading. Great thought has been given to including stories perfect for holiday reading as well. The wide variety of vocabulary provides opportunity for children to learn new words such as what is "falsetto," what does "cock of the walk" mean, and what's "a nook and cranny"? The humorous illustrations allow children to participate as they point to their favorite ice cream flavor and laugh at the antics of the Puckerdoodle children." --Linda Meinelt, School Librarian

Mardo Williams' story is right out of the pages of Horatio Alger whose books he read as a young boy. Alger's heroes valiantly overcome poverty and adversity and this seems to be exactly what he did. He grew up on a 100-acre subsistence farm; serendipitously--after he lost his job at the Kenton, Ohio car shops because of the Depression--he answered an ad and became the only reporter at the Kenton News-Republican, a small Ohio daily. (He'd always had an inclination to write.) He had no college degree but while he'd been cleaning out the insides of the smokestacks of the locomotives up in Toledo, he'd taken two courses at the business school there, shorthand and typing, and so he was prepared to be a reporter. He did all the beats, hoofed it around the small town of Kenton digging up stories on slow news days.

Nineteen years later, after World War II ended, the Columbus Dispatch recruited him to the copy desk. He moved up the ranks from the copy desk to travel editor . . . and in 1954 he was asked to develop and write stories about the world of business. Columbus was booming at this time. Mardo, familiar with pounding the pavement to search out stories, did just that. Within the year, he was writing a daily business column with byline.

After he retired from the Dispatch in 1970, he freelanced for several years, editing a newsletter and doing publicity. He began his second career, writing books, at age 88, after his wife died after a long illness. At his daughters' urging, he learned to use a computer and began writing his first book, Maude. It was about his mother, who lived to be 110, and also about life at the turn of the century when everything was done arduously by hand. This was to be for family, but his daughter Kay read a few sections to her writers group. They loved it, and wanted more.

The manuscript grew from 50 pages to a 334 page book with a 32 page picture insert. The finished product was published in 1996, Maude (1883--1993): She Grew Up with the Country. It has been adopted by some college American history classes as a supplemental text "to put a human face on history."

Then Mardo wrote an illustrated children's book, Great-Grandpa Fussy and the Little Puckerdoodles, based on the escapades of four of his great-grandchildren. He decided at age 92 that he would try something completely different--a novel, One Last Dance. His magnum opus.

He spent three years writing the first draft while touring with his first book, Maude. He persevered through illness and blindness, determined to finish it before he died. It was the most challenging piece of writing in his 73-year writing career--a long work of fiction when he'd been writing short non-fiction pieces for most of his life. After his death, his daughters Kay and Jerri spent another three years editing and revising One Last Dance, and after it was published, four more years touring with it as the centerpiece of their program, Keep Dancing!

One Last Dance fills a niche, especially now that the baby boomers have turned 65. The novel gives readers hope and laughs. Book discussion groups throughout the country have read it and loved it. Many readers have said, "Well, if Mardo could do this (embark on a new romance, write a book) in his nineties, I can certainly give it a try myself; I'm only 70 or 80 . . ."

Many honors came to Mardo and to his writing after his death. In 2006 One Last Dance won the Independent Publishers Award for Best Regional Fiction. The book was also one of five Finalists in the National Readers' Choice Awards for 2005. Before that, Mardo won an Ohioana Citation--their first posthumous--for his body of work as a journalist and author (for, at that time, Maude and Great-Grandpa Fussy).

His daughters, Kay and Jerri, won a 2009 Ohioana Citation for "unique and outstanding accomplishment in the field of writing and editing" for finishing One Last Dance.

What a delightful story! I loved the generational inclusion and the warmth of the family ties that are the foundation for this endearing story. Yukiko Mishima's illustrations are masterful and engaging and add delth to the story. Highly recommended!

You have subscribed to alerts for Mardo Williams.

You have been added to Mardo Williams's favorite list.

You can also sign-up to receive email notifications whenever Mardo Williams releases a new book.