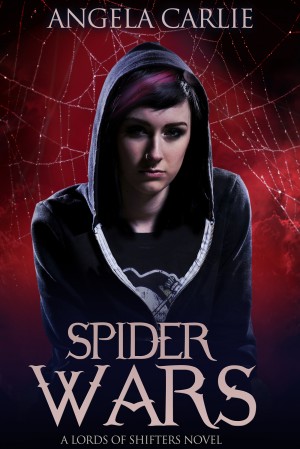 Angela Carlie writes fiction for adults and young people. She lives in the beautiful Pacific Northwest with her husband and son. She loves reading, writing, hiking, kayaking, and traveling.

About the Series: Lords of Shifters

There are realms on this world where unusual creatures dwell. They remain hidden from humans to save their kind, but over the years, they too have suffered from the destruction humans have endured. Struggles over power and greed have ignited a fire between them, causing hunger and pain for some, and luxury for others.

Three small town teens, best friends, are thrust into the creatures’ war. Not only will their friendship be tested, but their ability to survive and save their own species and the ones they love will be challenged.

Also in Series: Lords of Shifters

I am a huge fan of Angela Carlie's writing & this book did not disappoint. I enjoyed getting to see Jess's point of view through the events of the story which was first told from Lora's point of view. Jess's family is fascinating, including those who are not related by blood but by other bonds. The history of how they came to be immortal, the process they must follow, was intriguing and I sort of wished there was a little more history there.

Without fail, Angela has created fully realized characters who seem to live on the pages of their own volition. I really loved that they were multi-faceted & that even the villains had subtleties which Jess picked up on here and there throughout the book. Jess is snarky & full of attitude. Her inner thoughts are often very acerbic & just as often hilarious. She is completely a teenager & completely real in the moment.

Jess's relationships with both Nicu & Johnny were confusing -- and they were supposed to be! These guys pull at her for differing reasons but seemingly with just as much force at times. And while Jess may have gone back and forth over which of them she felt most attracted to at the time, it was not the focus of the story which is rightly focused on evil chicks who can turn into spiders & do some pretty nasty things. *shiver*

I felt the story meandered a little in places, but that could have been because Jess was only going through the motions for parts of the story due to things she had experienced. There was quite a bit of hot & heavy sensuality & some kind of gross descriptions of violence & injury laced throughout the story which I don't personally mind too much but I would recommend this book to older teens & true young adults.

All in all, I would definitely say that anyone who enjoys paranormal, shape-shifty goodness should pick this one up & if you haven't read Loramendi's Story (the first book in the Lords of Shifters series) -- what are you waiting for? Get that one too!

You have subscribed to alerts for Angela Carlie.

You have been added to Angela Carlie's favorite list.

You can also sign-up to receive email notifications whenever Angela Carlie releases a new book.