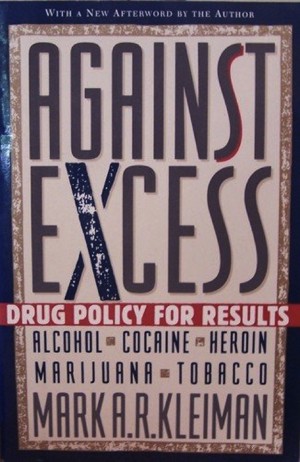 Mark Kleiman is an American professor, author, and blogger who is a Professor of Public Policy at the UCLA School of Public Affairs. Kleiman is a nationally recognized expert in the field of crime and drug policy and the author of When Brute Force Fails: How to Have Less Crime and Less Punishment, Drugs and Drug Policy: What Everyone Needs to Know, Marijuana Legalization: What Everyone Needs to Know, Marijuana: Costs of Abuse, Costs of Control, and Against Excess: Drug Policy for Results. Kleiman also advises governments from the local to federal levels on crime control and drug policy.

As a student of criminal and drug policy, I initially assumed that a public policy book 2 decades old would have to be digested with a generous shake of salt, and that obsolete statistics and public realities would have to enter my brain with asterisks attached. My impressions could not have been more misleading.

Against Excess is not just a political handbook or a legislative agenda frozen in time. Rather, it approaches the debate around drug policy from first premises, starting with the principal goals of drug policy, its conflicting aims, and the levers by which these ends are accomplished. Although Kleiman is consistently witty, lucid, and replete with detail, the book manages to be very readable and accessible. The beginner to drug policy receives a fine introduction to the study, in which the principles are articulated before the evidence is introduced. The expert of the field will gain mental clarification of the field's moral underpinning, pitfalls and complications.

Once the theory and proper context has been developed, Kleiman applies these frameworks to drug policy's five biggest subjects: alcohol, cocaine, heroin, marijuana, and tobacco. As Kleiman points out, each drug deserves a different approach, based on unique pharmacological, market, and cultural profiles. Kleiman doesn't relent from applying simple principles and clear logic to each situation, generating coherent and optimized policy goals for each.

In that spirit, accepting the fundamental difficulties of the field and tactically working around them, a much-needed and effective vision for drug policy is presented.

You have subscribed to alerts for Mark Kleiman.

You have been added to Mark Kleiman's favorite list.

You can also sign-up to receive email notifications whenever Mark Kleiman releases a new book.