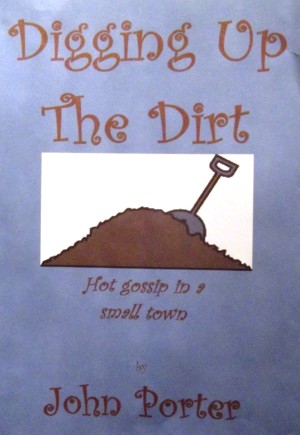 Digging Up The Dirt

By John Porter
All small towns thrive on gossip. It's not what happens that matters but what's said about it. A clergyman visiting a crazy old lady soon finds that tittle-tattle can be socially harmful, as well as confusing, and quite dangerous to his own health. One of ten stories in a compilation called A Collection Of Dirty Little Stories.

John Porter spent his childhood growing up amongst the fruit orchards of North Kent, and after leaving grammar school, gained his horticultural qualifications at Hadlow College near the historic spa town of Tunbridge Wells. He migrated to Australia at the age of nineteen, with his first wife, in 1980.

Although deriving his main income over the years from employment in the plant industry and from his own wholesale and retail nurseries, John has always maintained the keen interest in words and storytelling that was first fired up by his father’s vast collection of books, and an enigmatic and inspirational English teacher at Queen Elizabeth’s Grammar School, Faversham.

John has written for many local organisations and groups in his native England, as well as preparing a number of public documents for the Campaign for Nuclear Disarmament in the 1980’s. He has contributed many poems and short stories to various publications in England and Australia over the years, including meditations for The Upper Room – an international, non-denominational Christian booklet.

The self-published autobiography, "The Road Less Travelled" (2008), was John’s first major book, and describes in fascinating detail the journey he took over three continents during his first fifty years. It is now available from Smashwords and includes many personal photographs of his journey through his first half-century. Since then he has also self-published an anthology of poems entitled "Out Of My Head", and an account of a whirlwind seven-day visit to the UK, called "Turning The Page", which humorously describes the brushes he experienced with the history, geography and sociology of his original homeland. "The Collector" is John’s first full-length novel, and will be released later in 2013. He has published a series of ten short stories with the theme of 'Dirt', which are gathered in a compilation entitled "A Collection Of Dirty Little Stories" which is available at Smashwords. A companion volume called "The Cutest Little Animal Horror Stories", published earlier has already proved very popular with readers.

The author now lives and writes in a garden centre in rural New South Wales, Australia, which he runs and owns with his present wife, drawing inspiration for his books from the Australian bush, the daily customers, and the host of chickens, birds, dogs, cats, rabbits and guineapigs which are bred on the premises, as well as his own lunacy.

You have subscribed to alerts for John Porter.

You have been added to John Porter's favorite list.

You can also sign-up to receive email notifications whenever John Porter releases a new book.