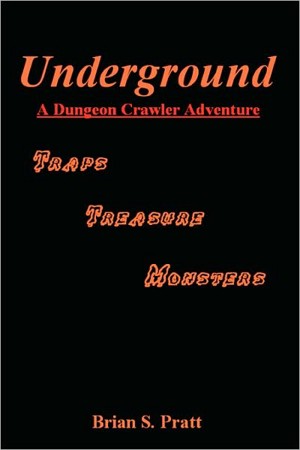 By Brian S. Pratt
Rated 5.00/5 based on 2 reviews
Four people awaken in an underground room. Not sure how they came to be there, or who is responsible, they must work together in order to find a way out of what soon turns into a hostile and lethal situation. Traps, treasure, and monsters abound. In order to survive they will have to put their wits to the test.
Available ebook formats: epub mobi pdf rtf lrf pdb txt html
First 25% Sample: epub mobi (Kindle) lrf more Online Reader
pdb
Price: $4.95 USD
Buy Add to Library Give as a Gift
How gifting works
Create Widget
Tags: fiction adventure action adult fantasy magic fun epic dungeon teen series spelunking traps thieves thief spell safe young
About Brian S. Pratt

Well written, felt kind of like a table top rpg but with a little extra umph, looking forward to finding out the who's and the why's of what happened

For a dungeon crawler, this one was all right. I like fantasy, spent most of my time in the Forgotten Realms of late and decided to try this one. Got hooked on Pratt's writing with Adventurer's Guild (see my review posted there) then came to this one.

The main character is a farm girl named Breya. She, along with three others, awake in an room with no doors or windows. Pratt devised a totally unique way to get them out. Believe me when I tell you, it took me by surprise.

From there, Breya and the others work their way out along dark corridors and long abandoned rooms. They haven't a clue who brought them there, each comes from very different backgrounds and places. It's the usual fare in that there are traps, treasure, monsters(rather licked the ones that 'clacked'), and puzzles to figure out. But it was the way Pratt got them from point a to point b. Some of the most mundane actions turn out to have great significance. Who would have thought baking bread could accomplish so much?

About twenty pages in, the action starts and doesn't let go until the end. Fun, action, sword fighting, I found myself cheering them on. Okay, maybe not but you get the idea.

A good book for the price. His website claims another is on the way, hope so.

About the only thing negative to say about it is that it was too short!