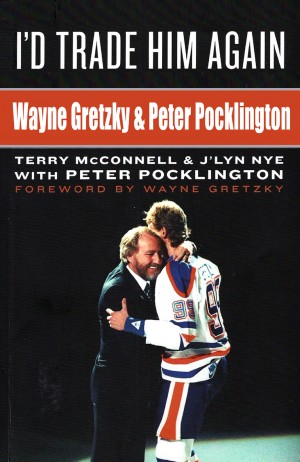 By Terry McConnell
THE TRADE! 25 years later, in the annals of professional hockey, no incident has resulted in such furor, such angst among Canadians as did the decision by team owner Peter Pocklington to trade Edmonton Oiler Wayne Gretzky to the Los Angeles Kings. Pocklington's biographers focus on the relationship between the two men, today and during the heady heydays of the five-time Stanley Cup champion team. More
Author's note: August 8, 2013 marks the 25th anniversary of the news conference during which THE TRADE was announced.

Author's note: Peter Pocklington earns no revenue from sales of this book and the full biography, The Puck Talks Here. The author, however, appreciates your support when you buy these books.

Summary: Peter Pocklington brought the people of Edmonton a winning franchise and the most skilled player in hockey history: The Great One, Wayne Gretzky.

This book consists of seven chapters as they were originally published in Peter Pocklington's biography "I'd Trade Him Again: on Gretzky, Politics and the Pursuit of the Perfect Deal." The selected content tell the fascinating story of the flamboyant entrepreneur's tenure of the Edmonton Oilers, from its origins as a WHA team to its heights as an NHL powerhouse.

"I'D TRADE HIM AGAIN: WAYNE GRETZKY & PETER POCKLINGTON" is an easy-to-read "must read" for hockey fans on both sides of the border. Get inside details from the major players in this dramatic tale.

"It's clear McConnell and Nye wouldn't let Pocklington spin his tale without checks and balances... They have done a professional job." Kevin Allen, USA Today

"I'D TRADE HIM AGAIN is a fascinating behind-the-scenes look at a man who is neither a villain nor a hero." Denis Gorman, Goodreads.com

"As great as the Great One. Five stars. I loved it." Shelley Zimmel, on Chapters.ca

Terry was born in Ingersoll, near London, Ontario, Canada, and studied journalism at Mohawk College in Hamilton, before landing his first job as a sportswriter at a suburban newspaper in Dundas, Ontario, in 1973.

One of his earliest memories, however, is of stacking freshly printed newspapers in the pressroom at his father’s weekly newspaper in Tilbury, Ontario, near Windsor. He estimates he was no older than six or seven at the time.

He eventually returned to the family business, purchasing his father’s two newspapers in Tilbury and Belle River, and launching a third in nearby Tecumseh. He was also a founding partner in a very successful shoppers’ paper in Chatham. His newspapers were sold in 1994, and the following year he moved his family to western Canada.

After his arrival in Edmonton in 1995, Terry McConnell became one of the city’s most widely read journalists.

In 2009, Terry co-authored I'd Trade Him Again: On Gretzky, Politics and the Pursuit of the Perfect Deal, in co-operation with former Edmonton Oilers owner and entrepreneur Peter Pocklington and fellow journalist J'lyn Nye. The first and second editions of the book were published by Fenn Publishing Inc., of Toronto, Ontario, Canada. Following the demise of that publisher, rights reverted to the authors. Terry chose to self-publish the book, and retitled it The Puck Talks Here: The amazing life & turbulent times of Peter Pocklington, a title he felt more accurately reflected the book's contents.

He has also published a "mini-book" titled I'd Trade Him Again: Wayne Gretzky & Peter Pocklington, which can be accurately described as a hockey book. It consists of seven chapters from the complete biography which chronicle the building of the Edmonton Oilers, the Gretzky trade and the relationship between the two men.;

Terry lives in Palm Springs, CA, and Edmonton, AB. He is the proud father of five children, and grandfather of six. He nows works as a media consultant and as a biographer.

You have subscribed to alerts for Terry McConnell.

You have been added to Terry McConnell's favorite list.

You can also sign-up to receive email notifications whenever Terry McConnell releases a new book.