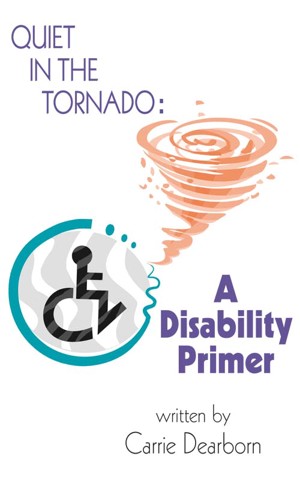 Quiet in the Tornado: A Disability Primer

By Carrie Dearborn
"Carrie Dearborn's no-holds-barred approach to talking about disability
wrestles us to the ground from her wheelchair. Surprising, disarming,
painful, funny - you'll go through every emotion and reach new understanding as you let go of pre-conceived notions about how to deal with disability, whether you are temporarily abled or not. -Meizhu Lui, Co-Author, The Color of Wealth More
Interspersed between the author's at-times painful accounts of surviving a life-threatening stroke, readers will find useful practical advice for coping with adult onset disability and, more importantly, life outside of the hospital.

This book offers sound, practical advice grounded in years of experience from a
woman with a terrific sense of humor. The writing is deep enough to be engaging
but written in sections brief enough to allow the reader to digest and reflect
upon the important concepts presented.

While the author claims to have written this book for people who are recovering from similar injuries to her own, their families, and loved ones, I believe it is equally beneficial for health care professionals. Carrie provides important recommendations about
interacting with people who are emerging from comas that will help health care
professionals understand what is and what is not helpful to their patients. In
turn, learning how to provide more sensitive care will reward care providers
with that wonderful feeling associated with knowing they have made valuable
contributions to someone's health and healing.

Fresh Out of a Coma

For Friends and Family

A Rainbow for the Blues: Why I Like Wheelchairs

God's Windows Explained: Dealing with Feelings of Gloom and Doom

OK, Feel Good Time: Heroes and Sheroes to Inspire Us

A Burden?: Getting Out of the Guilt and Burden Trap

How to Almost Die: and Why You Should Stay Alive

How to Have Fun in the Hospital! Miscellaneous Things

How it (Usually) Works: Who's Who in the Hospital

Patient’s Bill of Rights - My Version

What to Anticipate: Small Joys

Disability 101: Where to go for Housing, Work and Benefits

Before you go: From Bedsores to Bumpy Roads

You're out! Getting Around and other Post-Hospital Challenges

The Questions: Q&A with the Author

Carrie Dearborn is a writer, comedian, and advocate on disability issues. A former computer operator specialist and downhill ski instructor, Dearborn was 27 in 1981 when she had a stroke resulting from an Arterial Venus Malformation. One of the first AVM stroke survivors, she was kept alive by machines for one month, and spent seven months voiceless. She lived in the Boston Center for Independent Living Transitional Housing, and now lives in the community and uses a power wheelchair. Dearborn has had gigs doing "sit-down comedy" at neighborhood, heath care, disability, and gay and lesbian groups.

Dearborn is an advocate for people with disabilities on issues ranging from transportation access to health care issues. She has served on the board of the Boston Center for Independent Living, and was an advisor for many MBTA projects. In 1991, as part of the Disability Rights Movement, she joined 50 other wheelchair users at a 9-day 'lie-in" at the Massachusetts State House, after the governor tried to slashed funding for personal care attendants. The funding was restored.

Her articles, essays and book reviews have appeared in Sojourner: The Women's Forum; Equal Times; The New England Women’s Yellow Pages; Gay Community News; Lambda Book Report; Jamaica Plain Gazette; This Brain Has a Mouth; Disability Rag; as well as the Farrar, Straus and Giroux anthology, Whatever It Takes: Women on Women's Sport.

She has a degree from New England College in Henniker, NH and lives in Jamaica Plain, Massachusetts with her caregiver of 26 years. She is a member of the National Writers Union.

You have subscribed to alerts for Carrie Dearborn.

You have been added to Carrie Dearborn's favorite list.

You can also sign-up to receive email notifications whenever Carrie Dearborn releases a new book.