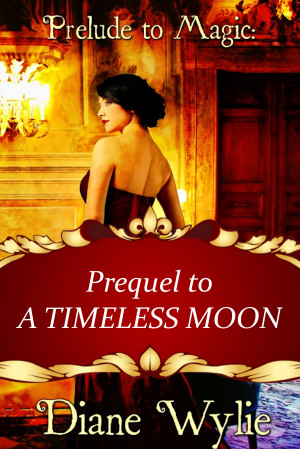 Ruby Elliott had the perfect life. Her husband, the rich and famous Illusionist, took her with him around the world. What woman of 1889 could ask for more? It was a woman’s place to stand beside her husband, right?

Then a chance encounter with an old woman and a cursed relic gives her husband REAL magic and sends their life spinning out of control. Find out how the magic begins. More
Ruby Elliott had the perfect life. Her husband, the rich and famous Illusionist, took her with him around the world and let her show off her trick birds on stage with him. Their young son had a chance to visit all kinds of exotic countries. What woman of 1889 could ask for more? It was a woman’s place to stand beside her handsome husband, right?

Diane Wylie is an identical twin, born in Philadelphia. She lives in Maryland now and is a hard-working, dog-and-family-loving, award-winning, Amazon best-selling author. Diane has been writing fiction since 2005, and her books fall into multiple genres including:

***Scottish Historical Romances:
Diane's latest interests have moved to earlier time periods. She loves to research new eras and has embarked on a new series. It will consist of a series of novellas published for ebook and print. Book One: BESIEGED, Book Two: HUNTED, and Book Three: REDEEMED have now been released. You can get all three in one ebook bundle called THE SCOTTISH FALCONERS. Who doesn't love Scottish historicals?

**Historical Romances:
Since watching Gone With the Wind as a child, I have also had an avid interest in the American Civil War. This interest comes to bear in my acclaimed historical romance novels, "SECRETS AND SACIFICES," "JENNY'S PASSION," and "LILA'S VOW," along with short story, "A Soldier to Love." "ADAM'S TREASURE", also features some figures from history--Pinkerton agents.

"DAUGHTERS OF THE CIVIL WAR" is a new book bundle containing two of my Civil War romances. People have been snatching up this deal by the hundreds!

**Fantasy/Time Travel Romances:
A hot time travel romance series, FOREVER YOUNG is being re-released. Each timeless magician gets his power for magic from a different amulet. But his power comes with a price...immortality. Is this a curse or a blessing? Book One: "A TIMELESS MOON" (formerly titled Moonlight and Illusions) earned this from a reviewer, "With brilliant dialogue, a storyline that will leave you breathless, and two people who have much more in common than they know, will make you swoon with every glance." Book Two, "A TIMELESS MOON" (formerly titled Magic of the Pentacle), was the first place winner in the 2017 Chanticleer Chatelaine Book Awards for Women's Fiction and Romantic Fiction. One reviewer called it "a fast moving book with twists and turns you never expected".

**Romantic Suspense:
A recent addition to my group of books is "OUTLAW LOVER", a romantic suspense that draws on my experience growing up as part of an autoracing family.

I live in Maryland with my husband (a former racecar driver), son, and two little Welsh corgis, Dixie and Yoshi. I am also happy to live relatively close to my daughter, son-in-law, and two cute-as-a-button grandchildren.

I am a very lucky person to have this life, and I am grateful beyond words for my loving family.

Thanks for taking the time to visit this page. I hope you like these books and will tell your friends about them. For more information, check out www.dianewylie.com. You can follow me on Facebook and Twitter too. The links are on my website.

Reviews of Prelude to Magic by Diane Wylie

You have subscribed to alerts for Diane Wylie.

You have been added to Diane Wylie's favorite list.

You can also sign-up to receive email notifications whenever Diane Wylie releases a new book.