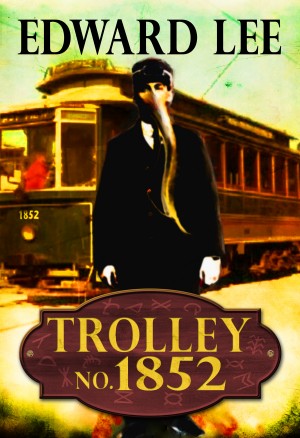 Rated 3.00/5 based on 1 reviews
Through the midnight bowels of New York City, the trolley travels. Admitting only a special sort of passenger, and taking them to a very select destination.

The 1852 Club is a bordello unlike any other. Its women are the most beautiful and they will do anything. But there is something else going on at this sex club, monsters are performing vile acts on each other and other dimensions are opening. More
In 1934, horror writer H.P. Lovecraft is invited to write a story for a subversive underground magazine, all on the condition that a pseudonym will be used. The pay is lofty, and God knows, Lovecraft needs the money. There's just one catch. It has to be a pornographic story .

Through the midnight bowels of New York City, the trolley travels. Admitting only a special sort of passenger, and taking them to a very select destination.

The 1852 Club is a bordello unlike any other. Its women are the most beautiful in the whole city and they will do anything. But there is something else going on at this sex club. In the back rooms monsters are performing vile acts on each other and doors to other dimensions are opening.

Edward Lee has had more than 40 books published in the horror and suspense field, including CITY INFERNAL, THE GOLEM, and BLACK TRAIN. His movie, HEADER was released on DVD by Synapse Films, in June, 2009. Recent releases include the stories, “You Are My Everything” and “The Cyesologniac,” the Lovecraftian novella “Trolley No. 1852,” and the hardcore novel HAUNTER OF THE THRESHOLD. Currently, Lee is working on HEADER 3. Lee lives on Florida’s St. Pete Beach.

I have a love hate relationship with this book.
After all I have heard about Edward Lee, I picked this book up expecting a lot more than what I got.

The writing of the actual story itself is really well done, if though a little too over descriptive, even for someone mimicing Lovecraft's writing. Yet despite that, the words flow well together and create a wonderfully written tale. Yet this is off-set by the story that bookends that tale about Lovecraft himself where the writing is actually almost abysmal in the way it is approached. As it is written in third person rather than first, there is no real reason to phrase the language in such a way as to make it seem as if it's from HP's mind. (and poorly at that no less) To be frank, the whole part of the story about Lovecraft could easily be removed and the actual Trolly story kept, and this story would love nothing. In fact, it would be a lot stronger and more enjoyable.

As for Edward Lee's gross out horror which he is so well known for...it's lacking in this story unless you don't have access to the internet. There was only one actual account in this story where the story got close to getting to me, and that was simply the textural description of the Trogg's semen. Other than that, nothing else in this story was overly line crossing in its subject matter.

Another thing that is distraction is the 12" penis that the main character is endowed with. I never understood why authors who can't seem to understand the workings of the human body continually put disproportioned penis sizes in their stories. It detracts from the actual story itself, and is beyond realistic. Anyone who has read any of the medical and personal accounts of those blessed/cursed with said size understands that they are anything but pleasurable. Ron Jeremy has a 9.75" penis and has his own set of issues involving it, so 12" would be even worse.

I also found the final confrontation of the story to be fairly weak in its resolution, though the actual ending of the Trolly story was sufficiently Lovecraftian to make up for it.

All in all, if you are a Lovecraft fan, this story is a good one to read if you ignore the story that surrounds the actual story of 'Trolly No. 1852'. Had the book-end story been removed this would easily be a 4-4.5 star story.

You have subscribed to alerts for Edward Lee.

You have been added to Edward Lee's favorite list.

You can also sign-up to receive email notifications whenever Edward Lee releases a new book.