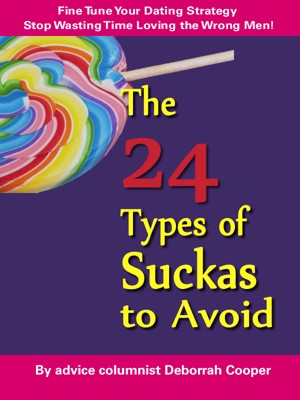 The 24 Types of Suckas to Avoid

If you've been repeatedly hooking up with guys that that don't pay you the proper attention, treat you like you're nothing but a booty call, or make you cry then you need to change what you seek in a man and how you look for it!

This book shows you how to quickly recognize and eliminate 24 different time wasting jokers. You'll get the tools you need to avoid dead-end relationships with commitment phobic jokers, heart breaking players, immature mamas boys, addicts of any type, indecisive men that don't know what they want, angry woman haters, and a host of other rogues single women run into on a daily basis.

Also great for guys that have been wondering why they struggle getting and keeping a woman's interest. Check yourself - make sure you're not one of the 24 suckas on the list!

Advice columnist Deborrah Cooper comes at you with no holds barred straight talk about changing yourself so you can change your love life. Learn how to recognize a man that can truly love you back, be the man that can love a woman deeply, and finally land the relationship of your dreams.
Available ebook formats: epub mobi pdf lrf pdb html
First 7% Sample: epub mobi (Kindle) lrf more Online Reader
pdb
Price: $9.99 USD
Buy Add to Library Give as a Gift
How gifting works
Create Widget
Tags: relationships dating advice singles black american romance interracial dating interracial romance bfwm women and love mamas boys
About Deborrah Cooper

Deborrah Cooper gained underground acclaim through her 18-year career of relationship advice counseling, conducting seminars and workshops in the San Francisco Bay Area and as a producer and host of ”HeartBeat,” a cable television talk show in Oakland, California. She was a frequent on-air guest at KMEL 106.1 radio and guest columnist on AOL’s NetNoir channel. Since 2007 she hosts and produces The Date Smarter Not Harder Relationships Talk Show on the BlogTalkRadio Network.

Ms. Cooper has been featured in Black Enterprise magazine, and interviewed for CNN.Com, Ebony, Essence, Honey, Jet, and Downtown Oakland magazines, The Dallas Morning News, The Oakland Tribune, and many other regional and international publications and websites. She has also appeared as a guest expert on the nationally televised Tom Joyner Morning Show, The Michael Baisden Show, The Al Sharpton Show, The Michael Eric Dyson show, on “Men Are From Mars, Women are from Venus” with host Cybill Shepherd, and featured on BET Television’s “Oh Drama!”

Currently, Ms. Cooper writes a dating advice column for the San Francisco Examiner (online edition), serving as the S.F. Dating Advice Examiner. Writing under the moniker, “Ms. HeartBeat,” she has penned hundreds of articles and provided relationship advice to thousands on her popular blog Surviving Dating.Com, and the groundbreaking AskHeartBeat.Com website. Established in 1997, AskHeartBeat.Com is one of the longest running Black owned websites on the Internet, and the first to focus exclusively on Black male/female relationships. 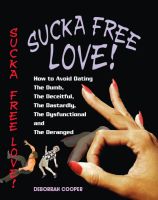 You have subscribed to alerts for Deborrah Cooper.

You have been added to Deborrah Cooper's favorite list.

You can also sign-up to receive email notifications whenever Deborrah Cooper releases a new book.