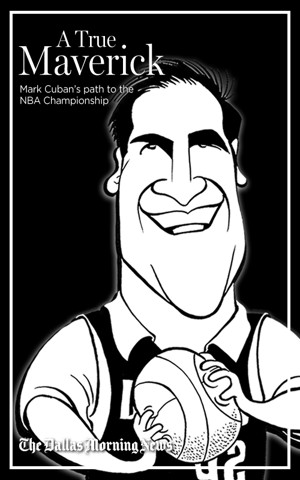 A True Maverick: Mark Cuban's path to the NBA championship

By The Dallas Morning News
Eight Dallas journalists capture Mark Cuban's development from a broke kid just arriving in town to a sophisticated team owner in this short collection of stories and essays from The Dallas Morning News. More
Find out how Mark Cuban went from flat broke and sleeping on beer-stained floors to fighting with officials in his seat by the Mav's bench. The Mavericks owner turned out to be exactly what the team needed as it made its way to be the 2011 NBA champs: An owner who keeps things interesting and makes good on his promises.

Established in 1885, The Dallas Morning News is Texas’ leading newspaper. Its portfolio of print and online products reaches an average daily audience of more than 1.1 million.

The newspaper has received nine Pulitzer Prizes since 1986, as well as numerous other industry awards recognizing the quality of its investigative and feature journalism, design and photojournalism. In 2010, The News received the Pulitzer Prize for an editorial series highlighting the economic disparity between the northern half and southern half of Dallas.

The Dallas Morning News is the flagship newspaper subsidiary of A. H. Belo Corporation.

You have subscribed to alerts for The Dallas Morning News.

Would you like to favorite The Dallas Morning News?

You have been added to The Dallas Morning News's favorite list.

You can also sign-up to receive email notifications whenever The Dallas Morning News releases a new book.