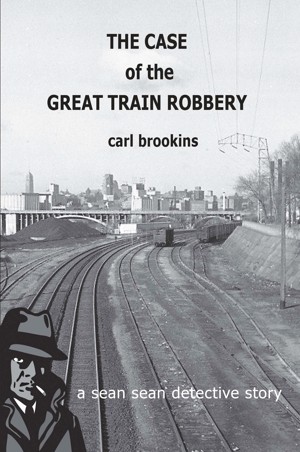 The Case of the Great Train Robbery

By Carl Brookins
Diminutive P.I. Sean Sean is attacked in a suburban back yard when he unearths an old stash of cash and a weapon. Trying to discover the source of the money, Sean is led on a dangerous trail of conspiracy, corruption and long-delayed justice. Loosely based on a ninety-year-old Railway Express train heist in South Saint Paul, Minnesota.

Before he became a mystery writer and reviewer, Brookins was a counselor and faculty member at Metropolitan State University in Saint Paul, Minnesota. He has reviewed mystery fiction for the Saint Paul Pioneer Press and for Mystery Scene Magazine. His reviews now appear on his own web site, on more than a dozen blogs and on several Internet review sites, Brookins is an avid recreational sailor and has sailed in many locations across the world. He is a member of Sisters in Crime, and Private Eye Writers of America. He can frequently be found touring bookstores and libraries with his companions-in-crime, The Minnesota Crime Wave. He writes the sailing adventure series featuring Michael Tanner and Mary Whitney, the Sean Sean private investigator detective series, and the Jack Marston academic series. He lives with his wife Jean of many years, in Roseville, Minnesota.

You have subscribed to alerts for Carl Brookins.

You have been added to Carl Brookins's favorite list.

You can also sign-up to receive email notifications whenever Carl Brookins releases a new book.