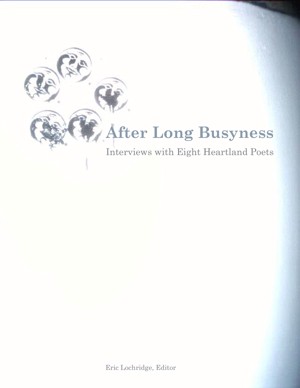 Originally conducted for poet and editor Eric Lochridge's After Long Busyness: A Poetry Blog, the interviews reveal a surprisingly robust community of poets in the state, ranging from poet laureate David Allan Evans to prairie haiku master Chad Lee Robinson and the only non-South Dakotan in the series, Wayne Miller, who appeared at the South Dakota Festival of Books and shared his outsider's perspective.

The book also features conversations with
Patrick Hicks, who writes with an international point of view rooted in the cities of the prairie, and Jim Reese, whose rural confessionalism shatters preconceived ideas of what “heartland” poetry can be.

Likewise, Andy Thorstenson frees landscape poetry from easy cliché and trite description, writing instead with a perspective sensitive to the marvels of the wildlands we inhabit. Adrian M. Forrette provides the essential political voice of the social critic. Christine Stewart-Nuñez presents us with observations that continually reach for a deeper emotional core, whether she’s writing about her travels in Turkey or tweaking the image of a supermodel.

Eric Lochridge is a poet and editor in Rapid City, South Dakota. He is the author of Father’s Curse ( FootHills Publishing, 2007), and the founding editor of After Long Busyness: A Poetry Blog. His poems have appeared in journals such as Paddlefish, Free Lunch, Slipstream, Diagram, Origami Condom and Main Channel Voices and in anthologies such as Beloved on the Earth: 150 Poems of Grief and Gratitude (Holy Cow! Press, 2009) and The XY Files: Poems on the Male Experience (Sherman Asher Publishing, 1997).

Eric has received grants and awards from the South Dakota Arts Council, the Dahl Arts Center and the High Plains Writers of Rapid City. He holds a degree in mass communications from South Dakota State University. His career in journalism began at the Rapid City Journal, and he now writes and edits professionally in the Black Hills of South Dakota.

You have subscribed to alerts for Eric Lochridge.

You have been added to Eric Lochridge's favorite list.

You can also sign-up to receive email notifications whenever Eric Lochridge releases a new book.