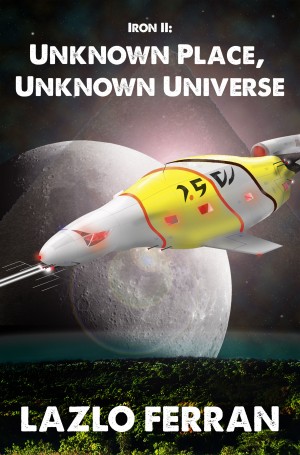 By Lazlo Ferran
Rated 5.00/5 based on 2 reviews
Three rookie space cadets crash on an unknown planet with aliens hot on their tail!

While a dissident alien scientist struggles to control time, he discovers that his wife will betray him. His favourite student discovers a way to see into the past but find himself surrounded by enemies in a fragmenting culture

Stone’s universe is shattered while he tries to escape and warn Earth of danger. More
*** Get 3 BOOKS FREE > lazloferran.com *** Book 1 Running: The Alien in the Mirror is FREE.

Three rookie space cadets crash on an unknown planet with aliens hot on their tail!

While a dissident alien scientist struggles to control time, he discovers that his wife will betray him. His favourite student discovers a way to see into the past but find himself surrounded by enemies in a complex, fragmenting culture.

Meanwhile, Stone, douchebag son of Iron Cross winner Jake Nanden, a nerd and a feminist from the Space Fleet Academy crash-land on an unknown planet after falling through a worm-hole in this gripping and visionary science fiction thriller.

Called Anubians by humans, the jackal-headed aliens are now revealed as Ischians but they are hiding something on this unknown planet in an unknown universe.

Stone’s universe is shattered while he tries to escape and warn Earth of danger..

If you like Stargate, Flight of the Phoenix, Stephen Baxter, Arthur C. Clarke or Greg Bear, you will just have to read this thought-provoking part two of the epic Iron Series.

The amazing final part of this adventure, Worlds Like Dust, is now available!

Please tell us a little about yourself.
I am 5’11’, dark hair, short – Army cut, slightly curly. Green eyes.

Describe your appearance in 10 words or less.
Getting middle aged, slightly paunchy with drying skin – like paper in places – except my mech arm. That’s synthetic skin on there and as smooth and supple as the day it was sprayed on. I even had mine tattooed but don’t tell anyone.

Would you kill for those you love?
I kill every day – most days – to keep my culture intact. I would say that is killing for those I love. Of course there is a moral code… And as a soldier the moral code is almost everything. After a while… killing… it sometimes seems to be the only thing you have left. Family are too far away.

Do you like animals?
I love animals. Their love is unconditional. You can never quite be sure with humans, can you?

Do you have a family?
Ha! Ha! Yes. A test-tube. No seriously my mother – Mary, my sister Justine and a dog – a collie called Frisky. My adoptive dad was the famous robotics designer Robert R. Nanden but he’s dead. My mother was his assistant and pretty accomplished at that!
Can you remember something from your childhood which influences your behaviour? I am not sure about any of my childhood memories. They are probably all implanted. I am a replicant. The first memory I am sure about is playing on the grass with my adoptive mother watching me playing cricket.
She shouted out, “Jake! You are such a talented cyborg!”
Even at my tender age, I knew a replicant was not the same thing as a cyborg and I knew that she should know, as her first husband had been a famous robot designer. Her words had always stuck in my head.
But anyway, adoptive parents of replicant children are always told to create some vivid experience for their kid in the first few days so that the imprinting takes properly. So it’s probably not significant.
Do you have any phobias?
Mirrors. Can’t stand them. They make me sweat and… well, I’m very nervous around them. I avoid them.

Please give us an interesting and unusual fact about yourself.
I write books – well, I am writing my first; a detective thriller. It’s kind of Raymond Chandler-ish. I call it Chandleresque, but I guess that’s bad English. My adoptive parents are first generation J5 – that’s a space station – so they kinda inherited a USAC – United States of America and Canada – accent. Anyway, I am rambling. The main character is Dusty. He’d a sucker for the pretty ladies!

About the Series: The War for Iron: Element of Civilization 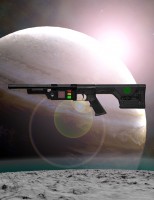 Replicants in the United States of America and Canada Space Fleet battle against Ionian Rebels and aliens in the Jupiter wars.

Also in Series: The War for Iron: Element of Civilization

I was first turned on to this author by Too Bright The Sun. It was an action filled Sci Fi read that extends beyond your standard Sci Fi books out there, with a deep and rich level of character development. Iron 2 continues along this vein. We are given new characters who are thrust via time travel into a planet where they have to use their wits to not only survive, but eventually become leaders for a struggling humanoid clan.

In and on itself, it is a good novel, but its main purpose is to focus on introducing us to the Iron series Universe. Here we are shown what the Aliens behind the scenes that caused the conflict in Too Bright The Sun are like, their beliefs, and their menacing intrusion into human affairs. Being able to understand the Alien’s philosophies and true intentions sets us up for what is sure to be a great third volume to the series. Can’t wait for its release.

SF Action and Adventure at its best
Although this is the second part of what promises to be a very exciting trilogy, it is also very much a standalone novel. The best way to describe Iron II is a subtle blending between Stargate and The Flight of the Phoenix. Without giving too much away, the basic plot is about three space academy graduates who crash land on an unknown planet inhabited by primitive humanoid warring tribes. The three’s knowledge of science and technology make them almost godlike in the eyes of the planet’s inhabitants, yet they soon discover that they are not the first beings from the stars to visit here. They befriend one of the tribes and manage to convince them to help with the tremendous task of recovering their space craft from beneath the shifting desert sand. During the course of repairing the ship they undergo many trials and tribulations – some excitingly dangerous whilst others are laugh-out-loud humorous. Lazlo Ferran has managed to create a truly believable scenario of adventure and intrigue that will keep you turning the pages all the way to the end. Recommended!