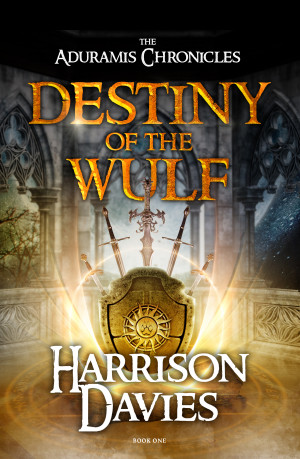 The Aduramis Chronicles: Destiny of The Wulf

By Harrison Davies
Destiny has chosen them. Death will make them pay.

In the eternal battle between dark magic and light, brothers Coinin and Marrok Wulf are called by an ancient Brotherhood to fulfil a great prophecy that will tip the fate of their world forever. More
'A Master Storyteller.' - Jaime Polychrones. Book Expo America 2017.

In the eternal battle between dark magic and light, brothers Coinin and Marrok Wulf are called by an ancient Brotherhood to fulfil a great prophecy that will tip the fate of their world forever.

At play are the greatest forces of darkness in the universe: Death himself and dark wizard, Lordich Secracar, who will stop at nothing to thwart the brothers’ journey and pull Er’ath, their beloved home world, into the void.

To head off Death’s ultimate plans to rule the gods and bring chaos to the heavens, the two brothers must follow their destiny to unite the five sacred Swords of Cerathil, in the Tower of Elyia, as the ancient seer, Aduramis foretold.

In their path lie untold enemies and unspoken treachery. Torn between the powers that be and their call to fate, Coinin and Marrok must overcome all that stands in their way, or let their precious world fall into ruin …

Journey now into the brave new world of The Aduramis Chronicles, a coming-of-age fantasy series that is as diverse as it is dense--combining all of the classical elements of the fantasy adventures you love with the plot-driven, multi-faceted character dramas of the modern age.

Take off with Book One, Destiny of The Wulf, into a world unlike any other, as the ticking hand of fate moves ever closer towards destruction ...

Harrison Davies (1973 - ) was born in Hartlepool in the United Kingdom. He now resides in Newcastle upon Tyne in the North of England. His passions include the written word, visual media such as indie filmmaking, and photography. He lives with his long time partner, Staffordshire Bull Terrier, and African Grey Parrot.

"It's far easier to launch yourself from a high place in the hope of sprouting wings, than it is to write a book. Yet once you've mastered it, you will be soaring higher than the birds." -Harrison Davies 2012.

About the Series: The Aduramis Chronicles

Book 1 - Destiny of The Wulf

Also, compiled into The Definitive Collection as Volumes 1-3.

Also in Series: The Aduramis Chronicles

You have subscribed to alerts for Harrison Davies.

You have been added to Harrison Davies's favorite list.

You can also sign-up to receive email notifications whenever Harrison Davies releases a new book.