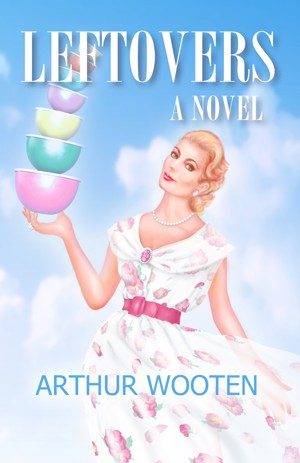 By Arthur Wooten
Rated 3.00/5 based on 1 review
In 1954, a divorced and destitute suburban housewife hopes to find self-esteem, financial security and true love selling Tupperware. More
"In this tale of heartbreak, failure, redemption, love and triumph,
Arthur Wooten’s gift for storytelling makes Leftovers a delicious read.”
– Michelle Churchill, author of I Thought I Grew Up
__________________

Vivian Lawson’s fantasy of being the perfect 1950s suburban housewife
is shattered when an uncontrollable event changes her life forever.

Destitute and left to fend for herself in a man’s world, she searches her New England town unable to find a job. With nowhere to turn, Vivian takes the advice of her wisecracking best friend, Babs, and reluctantly becomes a Tupperware lady.

Vivian struggles with low self-esteem as well as stage fright but with the support of Babs' lovesick brother, Stew, and the creator of Tupperware’s Home Party Plan system, Brownie Wise, she may just find the strength to
conquer her inner demons and take control of her life.

Also a playwright, his works include the award winning Birthday Pie, which had its world premiere at the Waterfront Playhouse, Key West, FL. His one act plays, Lily and The Lunch, have been produced in New York City and most recently Te Anau, New Zealand.

For two years he was the humorist for the London based magazine, reFRESH. He is now a contributing writer for Passport Magazine.

Arthur grew up in Andover, MA, and now resides in New York City.

Reviews of Leftovers: A Novel by Arthur Wooten

I really enjoyed Wooten's previous books and was excited to read this newer one. It was enjoyable enough however I felt the characters were rather simple and the storyline predictable. It also didn't have the humor of his other previous books. While it was a decent read I would recommend reading his "Fruit Cocktail" book instead.

You have subscribed to alerts for Arthur Wooten.

You have been added to Arthur Wooten's favorite list.

You can also sign-up to receive email notifications whenever Arthur Wooten releases a new book.