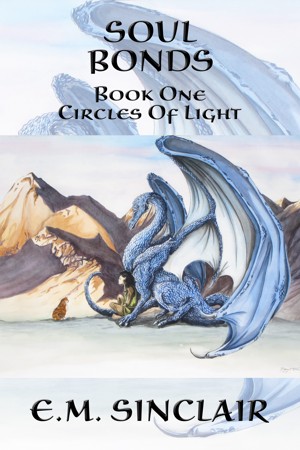 By E.M. Sinclair
Rated 4.14/5 based on 7 reviews
A young slave girl flees from the Lord who owns her, choosing to die in the mountains rather than become one of his 'pretties'. When that death seems all too likely, she is found by one of the Dragon Kindred and Tika's life takes a twist she could never have imagined in her wildest dreams - or her worst nightmares.
Download: epub mobi (Kindle) pdf more Online Reader
rtf lrf pdb txt
Price: Free! USD
Add to Library
Create Widget
Tags: adventure fantasy epic magical dragon
About E.M. Sinclair

From as far back as I can remember, I have always had a feeling that Dragons are real. When you look at a wide sky there is a glimpse from the corner of your eye which must surely be a Dragon whisking past. I always regarded the stories of monstrous fierce Dragons as being completely wrong and I detested stories of St George and his dragon killing tendencies.
When I was still a small child my grandfather gave me a copy of Kenneth Grahame's The Reluctant Dragon. It made complete sense to me - a Dragon living in a secluded cave, wanting only peace and quiet to write poetry.

Also in Series: Circles Of Light

This is the first book in the Circles of Light Series. It is epic fantasy safe for young adults, though there is mild fantasy violence. If you're looking for books to keep your interest for lots of reading that may keep you up well past your bedtime, you've found it here.

Tika is a young slave girl with a mysterious past. After escaping from her slavery to almost certain death, she discovers the fascinating world of dragons. Those dragons are the best part of the story. I could tell the author spent a lot of time daydreaming about them and what their existence would be like.

The story begins immediately with Tika's discovery of those dragons. She forms a bond (thus the title name) with one and her life intertwines with the species from that point on. You learn about the dragons and about Tika for a chapter or two, giving you the foundation for the rest of the story.

While Tika is the main character, the story that follows is largely about the dragons. They have personalities as big as they are. The characters of the dragons are distinct. It's easy to fall in love with some and dislike others with a passion. Not surprisingly, they aren't all happy about having a human among them, a fact that becomes pivotal in the events that follow.

Once much of the dragon's story is presented, the plot switches back to Tika, who may be more than just a runaway slave girl. Tika is a strong and courageous woman without being a Mary Sue. She's capable and talented, but inexperienced. There are other strong women in the story whose conversations move the plot forward, rather than focusing on relationships and the such. Basically, the author avoids the pitfalls that plague so many other strong female leads.

Upon reaching a new destination midway through the book, the rest of the world begins opening up. The reader gets to meet some of the other races in the world. It's a fascinating world too with exotic geographies and civilizations that are touched upon without bogging down into mind-numbing world-building.

The villain and some of the evil races are quite easy to dislike. The villain's personality is well developed and multifaceted rather than being one-dimensional. There's also a good deal of mystery as to his past.

The ending closes the book well with excitement and suspense. It leads one to want the next story. The one negative I found was that it was difficult to keep track of the names on occasion as a few of them sound similar. But that was resolved as the personalities developed. Each character is very much their own and their voices are distinct from each other.

One of the things I liked is the mystery involved with every character, who they are and why they are that way. The author teases the reader with hints, but never fully reveals what the past may hold. There are stories to develop through the rest of the series.

E.M. Sinclair's writing is daydreamy (yes, that's a word). You can see the fascination she has in exploring her world with her characters. The book is professional quality and well edited. I highly recommend for all ages.

I so did not want thirds series to end! I am not fond of short books so loved the length of each book (not to mention the "price")! Allowed for good character development. Was a new twist to a proven genre. I would love to see more from this author in a similar vein. Thank you E M Sinclair!

Although I was never excited about reading about dragons, this book made me reconsider my position. The story kept me curious enough to keep on reading to the very end. The plot was sound, the characters was engaging as well as interesting. The writing was clear enough too follow without getting confused on what was being said or described. I enjoyed reading this book.

I look forward on finding out what happens next to our little—and big heros—in the next book!

Good story. Not fantastic but Good.

A decent story if you want to escape into a fantasy world for a day and don't mind being dragged along for 5 more volumns afterwards. Toward the end of the 1st book I noticed a number of typographical errors. The story has a lot of characters to keep track of and many of them are rather one-sided and undeveloped. There are some nice imaginative elements to the world building, but it is pure escapist pap, with little literary or philosophical depth. There was an opportunity for a stimulating exploration of pacifism, but it is presented in such a simplistic way that it doesn't even seem like a real struggle for Min to abandon his belief in pacifism. E. M. Sinclair should have at least presented some of the counter arguments of Martin Luther King Jr and Gandhi before having the protagonists abandon pacifism. Finally, I found the character development of Rakhi, the principal antagonist, very weak. I would have liked to understand why he turned to evil and what happened between him and his sister in their youth.

Good story. Obvious story line but many interesting things happen along the way. Author really make you feel along with the heroine.

A really captivating book, well written and interesting leaving the reader wanting to read the sequel that is obviously going to appear. So I can't wait to see where this is going.

You have subscribed to alerts for E.M. Sinclair.

You have been added to E.M. Sinclair's favorite list.

You can also sign-up to receive email notifications whenever E.M. Sinclair releases a new book.