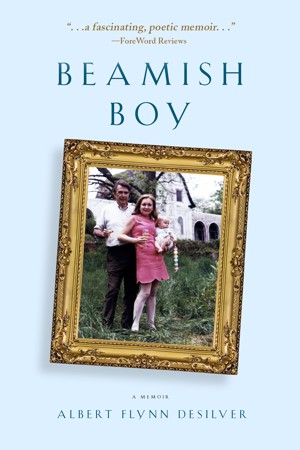 Beamish Boy (I Am Not My Story): A Memoir of Recovery & Awakening

"an extraordinary story of second chances"
—Marci Shimoff, New York Times Bestselling Auth More
*A NOTE REGARDING PRICE: Proceeds from the sale of each book will be donated to Literacy, Recovery, and Mindfulness education programs!]

“I was raised in a clock tower with bats in the belfry.” So begins, "Beamish Boy," the harrowing account of Albert Flynn DeSilver’s inspirational journey from suicidal alcoholic to Poet Laureate and beyond. Though growing up in material privilege in suburban Connecticut in the 1970’s and 80’s, Albert finds himself whirling through an emotional wasteland void of love, complicated by his mostly absent alcoholic mother, while being raised by a violent Swiss-German governess. A dramatic downgrade in lifestyle right at adolescence inspires a hasty attraction to alcohol, drugs, and a series of increasingly shocking adventures.

Filled with a luminous cast of characters, and told with searing honesty and ironic wit, "Beamish Boy" is a redemptive story of survival and letting go, as we follow Albert from one zany adventure and near-death experience to the next. He is run over by his best friend after blacking out in a driveway, contracts malaria in east Africa, and joins a psychedelic “therapy” cult, until he miraculously finds himself, through photography, poetry, and a hilarious awakening at a meditation retreat center, realizing finally, what it means to be fully alive and to truly love.

"Beamish Boy" charts a compelling spiritual journey, from violence and self-annihilation to creativity and self-realization. Not your typical addiction memoir, "Beamish Boy" reads more like a witty and poetic novel, offering a profound window into the human condition, complete with its tragedies and ecstasies—illuminating one man’s quest for lasting wisdom.

Albert Flynn DeSilver is an internationally published poet, author, artist, teacher, speaker, and writing coach. He served as the first Poet Laureate of Marin County, California from 2008-2010. Albert is the author of several books of poetry including "Letters to Early Street," and "Walking Tooth & Cloud," and his work has appeared in dozens of literary journals and anthologies worldwide. He presents at literary conferences nationally, directs a homecare agency, and teaches in the Teen and Family program at Spirit Rock Meditation Center near his home in Woodacre, California.

Video Trailer for "Beamish Boy"
This video was made by the folks at Amazon.com

Beamish Boy is a gripping story that takes the reader along for the wild ride of Albert’s life. Poignant imagery, beautifully laced throughout a web of personal life stories, captures the raw emotion of each unexpected moment, punctuating the despair or elation of each. I couldn’t put the book down, yet was left satisfied at the end.

Albert Flynn De Silver's memoir, Beamish Boy, is a compelling read. From the beginning description of this interesting family and the early exploits and foibles of Albert, through the self destructive years and into his enlightenment the book delivers. Crisp prose, rich descriptions and a gripping narrative make this one of the most enjoyable memoirs I have read. Read it!

Albert does what few people have or could... boldly put his most personal memories and feelings out to the public in a very readable style with concise tales and character descriptions. This is a lovely read and should be on your reading list without question.

I'm always amazed at how the human spirit can overcome so many challenges and disadvantages. Beamish Boy outlines the true life journey of Albert Flynn DeSilver. Beyond being a great read, entertaining, heartbreaking and ultimately inspiring, it is also a testimony to how we can all learn to thrive despite what life brings our way. It just so happens that I know Mr. DeSliver personally. I know what a fine man he is and how he shows up in this world in a way that is seeking to better the lives of everyone he touches. That's what is so amazing about this story because when you get to see a personal journey that goes from a horror to a life of joy and service, it is a marvel to behold. Mr. DeSilver takes on on such a journey and in going along for the ride, anyone who reads this book will find not just a ray of hope to rise out of despair but a blinding Phoenix rising from the ashes to bring out the best in all of us. This book is worth your time.

(reviewed 25 days after purchase)
Sharon Lippincott reviewed on May 13, 2012

Albert Flynn DeSilver was not always a beamish boy. If this book were fiction rather than memoir, the opening chapter is enough to make you wonder if he’d live long enough to even flicker. After getting my attention, DeSilver deftly backtracked to describe his emotionally bleak childhood in the Bell Tower, an architecturally unique abode with an abundance of bats — in the belfry and elsewhere — under the wary eye of “Das Hell Frau,” otherwise known as Miss Hedy, the family’s German-Swiss governess from Zurich. Not surprisingly, DeSilver fell in early with friends who had easy access to alcohol, beginning his downward spiral. His slide into binge drinking/drugs/sex blurs into similar stories found in an abundance of recovery memoirs.

Although his decline and many predicaments are predictable, a quick look at the Table of Contents is enough to show that his adventures and perspective are not. Who else attended Camp Pummelton or East Jesus Junior High? He goes from a Rocky Mountain Low to a Balcony in Africa. When in Doubt, he Joined a Cult. Later he had A Date With the Dalai Lama in Central Park.

What sets this book apart, far more than the unique path DeSilver found for eventual redemption, are the subtly compassionate humor with which he softens the account of his own and his family’s fundamental dysfunction, his tenderly frank admissions of human longing and frailty, lyrical description, and most of all, his profound realization that “I am not my story.” That realization enabled him to gradually transcend his dark and sordid past to become that metaphorical beamish boy. This simple, unheralded wisdom will remain with me long after details of the story have faded.

(reviewed 12 days after purchase)
Michael Kowalczyk reviewed on May 7, 2012

This fast moving narrative contains many well-developed stories in one. It is a memoir spanning several generations, a candid, perceptive, painful account of a “Gen X” young man becoming an artist, and a moving, inspiring memoir of recovery that magnificently illustrates why the author was named Poet Laureate of Marin County. It is worth reading as a family history alone, in part because of the compassion with which the author comes to treat the major characters: his parents. As a candid coming of age story, I believe Beamish Boy belongs on the shelf next to an excellent book like Good Times, Bad Times (Kirkwood). But, the author effectively evokes echoes of an even greater poet novelist from the past. Robert Penn Warren began the novel A Place to Come To with a description of Jed Tewkesbury’s drunk father falling down and getting run over by a horse cart. Beamish Boy begins with a similar, excruciating first-hand account from the author. Fortunately for the reader, that’s just the beginning of the similarities between these two American Poet-Novelists.

Albert writes a compelling book describing the trials and tribulations of his life. This book is a "must read!" I grew up as a dear friend of his oldest sister and witnessed first-hand the distance of his parents and the cruelty of Miss Hedy. Until I read his book, I had no idea how Albert's life progressed past the elementary years. I was heartbroken and angry for him, yet felt such joy as he navigated the waters of healing and maturing into the man he is today. Albert's journey is not only a remarkable one, but can serve to give hope to anyone who is going through struggles in life. Thank you, Albert, for sharing your story with the world.

I couldn't put "Beamish Boy" down, either! I downloaded the book, started reading, took a short break for dinner, and read into the night until I was done. Albert takes us on his journey from the beginnings of his life with his odd, distant parents in the bat-filled clock tower, through his painful coming of age in a town and family where he didn't feel he fit in, his search for the attention and love he didn't get in his childhood, and all the terrors and successes of his young adulthood. Albert has lived about ten lifetimes in his forty-plus years and we're there for every terrifying and uplifting minute in "Beamish Boy."

(reviewed the day of purchase)
Nancy Cook reviewed on March 30, 2012

I started reading this book and just couldn't put it down! An honest and gripping account, serious yet witty and funny, Albert describes how he overcame the obstacles of his upper class suburban childhood. Although born with a silver spoon in his mouth, this did not entitle him to all the warmth and attention a child needs. Oh, you will read how he got attention! You will also find out how he worked his way up out of depression and came to self-realization, gained self confidence, to become the mature, successful, professional adult he is today.

You have subscribed to alerts for Albert Flynn DeSilver.

You have been added to Albert Flynn DeSilver's favorite list.

You can also sign-up to receive email notifications whenever Albert Flynn DeSilver releases a new book.