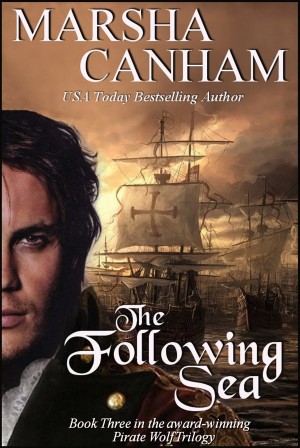 By Marsha Canham
The Following Sea is the third book in the Pirate Wolf Trilogy which began with Across A Moonlit Sea and The Iron Rose. This is Gabriel Dante's story involving sunken treasure ships, revenge, and love on the high seas. More
The Following Sea begins the same day The Iron Rose ends, with the Dante family sailing home to Pigeon Cay to treat their wounded and celebrate a massive attack and victory against the Spanish fleet. Along the way Gabriel Dante comes across a plague ship, which conscience dictates he must destroy, but after the first broadside strikes the floundering ship, he sees a young woman standing in the bow.

What follows is a story of the search for a legendary treasure ship, love, and action on the high seas as two strong pirate clans clash together on the Spanish Main.

Author of 16 Historical Romances and one contemp, my first book, China Rose, was published in 1984. Since then my historical romances have consistently appear on the USA Today list. I have been honored to be the recipient of multiple awards from Romantic Times, including 2 Lifetime Achievement awards, Storyteller of the Year, Medieval of the Year, Swashbuckler of the Year, as well as having been awarded one of a very few five star reviews handed out by Kathe Robin for The Blood of Roses. The Iron Rose was also named as one of the seven best Fiction books of the year by Publishers Weekly.

Review
sandra thomsen reviewed on April 22, 2012
(no rating)
Welcome back Marsha. I reread The Iron Rose before I read The following Sea. It was a nice transition to the new book. I enjoyed the book. I realized how uch I missed Marsha. I sure do love a good adventure tale.

You have subscribed to alerts for Marsha Canham.