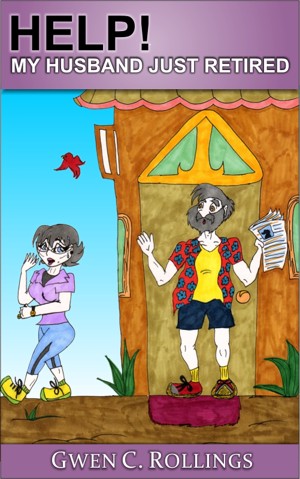 By Gwen Rollings
A wife imagines her husband’s retirement as the pot of gold at the end of the rainbow. Finally they will have time to do all the things they never had time to do before. Enjoy exotic vacations, walk along the beach together at sunset, and more. After reality sets in, he comes home one day and says “I’m home…forever.” This humorous advice guide is from a wife who has been there. More
After waiting almost forty years for her husband to stop his frantic-paced, globe-trotting career, a wife encounters the realities of retirement life that were never discussed at all the retirement seminars. Most women are clueless about what to expect when a husband walks in the door from work and says, “Honey, I’m home”…forever. We understand why financial preparation is necessary, but little is discussed about preparing a wife for the emotional and psychological reality of being “joined at the hip” with her husband every day. The author began her retirement journey unaware of all the detours, dead-ends, side trips, and wrong directions she would encounter and discovered that most of the other wives she met along the way were just as confused.

In this frank, honest, and humorous story, a seasoned retired wife takes a look back at what she thought was going to happen when her husband retired, what really happened, and what she would do differently if she had the opportunity for a do-over. Expectations, location, friendships, senior discounts, the Sandwich Generation, grandchildren, volunteering, downsizing, fitness, spiritual guidance, and adventure are a few topics every wife needs to consider before she has travelled too far down this new road. The author believes there should be Retired Wife Mentors provided by Medicare; but until that happens, Help! My Husband Just Retired should help a soon-to-be or novice retiree’s wife over the initial hurdles of what might prove to be the best destination spot of her lifetime.

Gwen Rollings was born Gwen Campagna to a mother raised in the Smokey Mountains of North Carolina and an Italian father from Boston, Massachusetts. Her mother married a serviceman in the mid 1940’s, and Gwen also married a serviceman (Marine). Gwen met her brother’s drill instructor at Parris Island, South Carolina when he was a young corporal in 1964. Their nomadic life has taken them and their four children, Gina, Buck, Lisa and Brittany, to live in over thirty different homes to include ones in Hawaii, Israel, Okinawa (Japan), Virginia, Kansas, South Carolina, North Carolina, and most recently Florida.

Writing has been Gwen’s passion since she wrote and acted in her sixth grade play. She has loved every part of the creative writing process especially poetry. She wrote her first book of poetry, Seasons of a Woman, in 1998 after compiling her many poems and realizing the majority of her poetry focused on the many joys and challenges in a woman’s life. Her poem, “Footsteps At The Door”, was selected for inclusion in the Chicken Soup Series (Chicken Soup for the Military Wife’s Soul).

After over three decades as a military wife, her husband, Major General Wayne Rollings, was finally leaving the Marine Corps. Gwen wanted to share her experiences as a military wife to give civilians a realistic look at the sacrifices and strength of the wives and families of the men who defend our country and encourage the young military wives just beginning their journey. Her book, We Band of Sisters, has inspired many young military wives to recognize how special and important their roles are as heroes on the home front.

Finally, retirement was another cycle in the life of a woman that Gwen wanted to chronicle. Help! My Husband Just Retired has been the biggest surprise of all in their married life. Once again, Gwen is the spokesperson for a generation of women whose husbands come home from work one day and stay there…forever. Her candid, humorous and spiritual approach to all her writing is meant to entertain, inform and inspire women of every age and offer a few good and courageous men the opportunity for a glimpse into what women really think.

Gwen's book of, Seasons of a Woman, received great reviews from women and men who wanted to give a lasting gift celebrating all the wonderful and chaotic events in a woman's life. One of the poems in that collected, entitled "Footsteps at the Door," was selected for inclusion in the Chicken Soup series: Chicken Soup for the Military Wife's Soul.

Zandi Krulak, wife of former Commandant of the Marine Corps, General Charles C. Krulak, USMC, wrote about We Band of Sisters:
"Gwen Rollings writes her heartwarming account of years spent as a Marine's wife with honesty and familiarity that assures you that she is telling it 'like it is.' Her conversational style makes for easy reading and the feeling that you would readily and quickly get to know this lady, and feel comfortable with her whether you had met her when she was a general's wife or a corporal's.

Help! My Husband Just Retired is presently available as an ebook and will be available as published book in the near future. Gwen has discovered this season of retirement is like starting all over again as a married couple. After almost forty years of living together but frequently separated due to career responsibilities, parenting, graduate degrees, and different interests, being "joined at the hip" created a whole new set of challenges, laughter, and role confusion. Every woman on the threshold of retirement will definitely benefit from Gwen's initiaal trials and errors. Women already on the retirement road for a while will relate to this must read humourous and informative narrative while will reveal what the retirement seminars leave out!.

You have subscribed to alerts for Gwen Rollings.

You have been added to Gwen Rollings's favorite list.

You can also sign-up to receive email notifications whenever Gwen Rollings releases a new book.