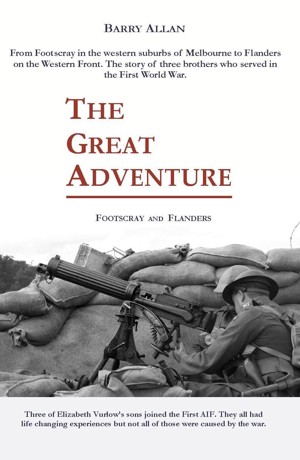 By Barry Allan
From Footscray in the western suburbs of Melbourne to Flanders on the Western Front. Personal accounts of three brothers George Joe and Dave, who served in the AIF during World War One, and of the families they left behind. They all had life changing experiences but not all of those were caused by the war. Battles at Lone Pine, Pozieres, The Somme, and others, are described from their perspective. More
Following from my earlier book 'Black Sheep and Gold Diggers' this book tells the story of three of Elizabeth Vurlow’s sons George, Joe and Dave, who served in the AIF during World War One.
Joe joined first and went to Gallipoli where less than a day after arriving he fought in the battle of Lone Pine. From there he went to the Western Front and fought in nearly every major AIF battle until his luck ran out just before the war finished. Dave, the youngest, lied about his age and was second to join. He had many adventures, some of them in VD hospitals. George the eldest brother was married and was last to join. By the time he returned to Australia his life was changed forever.
The story includes descriptions of fighting in major battles seen from the boys' close-up and personal viewpoint, and the effects on their families after the war.
Download: epub mobi (Kindle) pdf more Online Reader
lrf pdb
Price: Free! USD
Add to Library
Create Widget
Tags: war world war one somme ypres gallipoli anzac anzacs western front flanders aif 5th battalion machine gun company pioneer battalion footscray
About Barry Allan

Barry was born in Melbourne but grew up in Brisbane until joining the RAAF where he served for 20 years. After leaving the RAAF he lived in Darwin until retirement then moved back to Brisbane. His retirement hobby was tracing his family tree, and after finding several convict ancestors he started writing about their lives in 2005. The books were originally published in print and have sold out. New information still comes to hand, but rather than reprinting new editions he has released them as ebooks that can be easily updated.
The print books sold at cost and the ebooks are free because much of the information was contributed by other family members over the years. If casual readers enjoy the stories, that is payment enough.

You have subscribed to alerts for Barry Allan.

You have been added to Barry Allan's favorite list.

You can also sign-up to receive email notifications whenever Barry Allan releases a new book.