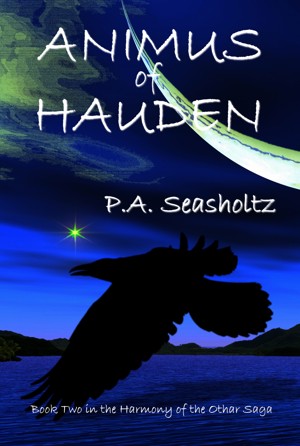 Animus of Hauden (Harmony of the Othar Saga #2)

By P.A. Seasholtz
The Darkening has awakened whispers long silent on Hauden, yet the grasping tendrils of prejudice threaten to choke the voices of harmony before they can take root. The long struggle to unify the Houses and the Nations has failed. The heavy voice of discord soaks the soil with a drowning blood, and deafened by a killing bloodlust, new threats creep across Hauden unheard.

Living quietly in a Minneapolis suburb, I have been writing the Harmony of the Othar Saga in various incarnations for more years than I am willing to admit. A story which began in college has, after many years, reached fruition with my first novel, Heart of Hauden. During the intervening years, I have helped raise my daughter, Katja, with my wife, Ann, worked in the information technology field, primarily as a database administrator, and received the support of friends and family to write as time permitted.

You have subscribed to alerts for P.A. Seasholtz.

You have been added to P.A. Seasholtz's favorite list.

You can also sign-up to receive email notifications whenever P.A. Seasholtz releases a new book.