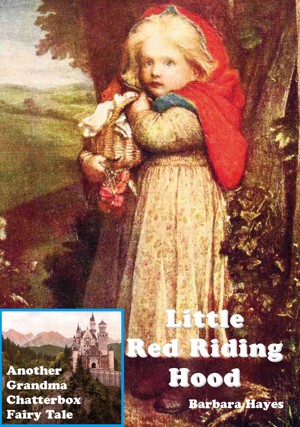 By Barbara Hayes
Rated 4.00/5 based on 1 review
A retelling of the classic fairy tale for 21st century youngsters by a master storyteller.

We are all familiar with Little Red Riding Hood, of course, but there is a lot more to her than a grandma and a wicked wolf. What about the archery contest or the pet raven? The story as we usually hear it today is a very much shortened version of the original. More
A retelling of the classic fairy tale for 21st century youngsters by a master storyteller.

We are all familiar with Little Red Riding Hood, of course, but there is a lot more to her than a grandma and a wicked wolf. What about the archery contest or the pet raven? The story as we usually hear it today is a very much shortened version of the original.

Fairy Stories have been told for hundreds and hundreds of years. No one really knows when they started or who first wrote them - or told them I expect. They probably started before many people could read or write.

Anyway they have been told and retold and everyone who tells them alters them a little bit to suit themselves or to please the people listening.
So Grandma Chatterbox when she was younger (which was a long time ago) went round and about and over the hills and far away searching for the oldest versions of Fairy Tales which she could find.

So now Grandma Chatterbox is going to tell you Fairy Stories as close to the oldest versions that she can get. After all it is part of every child’s education to know all the traditional tales.

Little Red Riding Hood was originally a French folk tale, written down by Charles Perrault in 1697.

Grandma Chatterbox just loves the old stories, and simply adores telling them to young children. The vocabularly and grammar in these stories is specially adapted to be suitable to younger children. When your children get a little bit older and start to learn to read you will find that the vocabulary contains words that they will be learning. Increase the type size on your tablet or other device and you can read along with your children.

So, are you ready for a story? Good, then I will begin...

About the Author
Barbara Hayes has been a best selling author of children’s books and comics for more than 40 years. She has been published around the world and in numerous languages. And yes - she really is a Grandma!
Download: epub mobi (Kindle) pdf more Online Reader
rtf lrf pdb txt
Price: Free! USD
Add to Library
Create Widget
Tags: wolf fairy tale happily ever after fairy story big bad wolf once upon a time woodcutter
About Barbara Hayes

Barbara Hayes worked on the editorial staff and spent many years writing stories and picture strip scripts for the Amalgamated Press, situated in Farringdon Street, which is round the corner from Fleet Street, London. Later Amalgamated Press became Fleetway Publications and subsequently part of the Daily Mirror IPC publishing group.
Barbara was just in time to work with some of the old Fleet Street hacks in all their drunken glory before the move away from Fleet Street to modern technical respectability.
She got advice straight from the lips of Hugh Cudlipp, the famous editor of the Daily Mirror, and became married to an Amalgamated Press editor, Leonard Matthews, who rose to be a managing editor and then an editorial director.
Over the years she has had some 80 books and about 7300 scripts published by companies from England to Australia to South Africa to Florida and back to Holland.
She likes to think of herself as an old hack writer who succeeded mainly because she always got her work in on time and the right length - but if you read on carefully you might find quite a few other hints to help you.

very good I loved it

You have subscribed to alerts for Barbara Hayes.

You have been added to Barbara Hayes's favorite list.

You can also sign-up to receive email notifications whenever Barbara Hayes releases a new book.