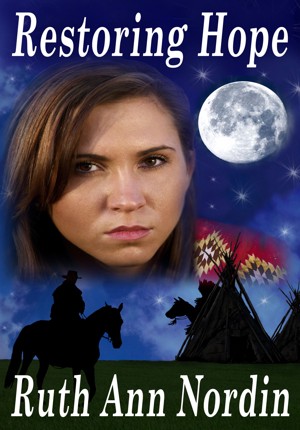 Rated 4.78/5 based on 9 reviews
In the middle of the night, Woape flees from three male Indians who've tormented her. Gary Milton rescues her, and she follows him home. To secure Gary's protection, she marries him. But the Indians haven't given up their pursuit of her.

*This is the first book in the Native American Romance Series. More
In the middle of the night, Woape flees from three male Indians who've tormented her. Gary Milton rescues her, and she follows him home. To secure Gary's protection, she marries him. But the Indians haven't given up their pursuit of her.

Ruth Ann Nordin has written almost 100 romances, ranging from Regencies to historical westerns to contemporaries. She plays with other genres from time to time, but her first love is romance. She has been happily married for twenty-two years to a sweet and funny guy, and they have four sons, who are all taller than Ruth now that they're 16, 17, 19, and 20. The good thing is she doesn't need a ladder. She considers herself very lucky to have led such a charmed life. Being able to play with characters and create stories is just icing on the cake. Hopefully, she'll get to keep doing this many years to come.

Review
Gur01 reviewed on April 25, 2020
(no rating)
The girl who has been raped recently could have been more worried being near another man I think..Somehow her eagerness doesn't fit.

Interesting novel free from smashwords. Begins with a young female Indian being rescued from 3 braves by a white man. The braves were from another tribe.

They had beat and raped her after killing her mother. The girl followed the man to the home that he and his sister shared with their aunt. Unfortunately the sister takes a disliking to the girl.

The two end up married while only being able to speak a few words to each other. The jealous Sister Julia arranges for her kidnapping by the rapist but instead believes that her brother is killed. The Indian girl is rescued by her brother.

Immediately after her rescue the rapist tried again to kidnap her but she escapes by train. Living with others she doesn't know if her pregnancy is from the rape or her husband. Plans work out and she's returned to her tribe.

Sister Julia and aunt leave with her brother searching for both of them. Finally all are reunited and a big battle won. Lots of distance covered with several surprise twists. A enjoyable book.

I enjoyed this story although the interaction between the whites and the Indians were suprising considering racial prejudices with a couple of exceptions being Julia and when it was a male Indian. Perhaps these were more enlightened whites.

A very enjoyable read. Well written. But I was disappointed to find that this is basically a romance novel, Since it was listed in the Western category, I assumed it would be a western. Other than that, a well written novel overall.

Outstanding! I am an avid reader of Louis L'Amour, and have been for years. I can see the differences between him and this author. Different styles, but they are both truly great authors. This is the first of this Author's books that I have read.

I most effeminately will not be the last.

I really loved this book. I normally don't enjoy historical romance books but there's just something about your writing that really drew me in. Thanks!

This is a very good book and a good read....has you holding your breath at times.

(review of free book)
Sheryl Watkins reviewed on Oct. 26, 2010
(no rating)
I really liked this book. I can't wait for the next one's
Thank you Ruth Ann

I enjoyed this book very much as well and really looking forward to the next book!! Thanks for the good read!