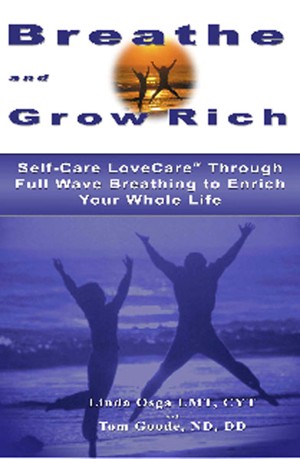 By Tom Goode
Breathe and Grow Rich is the result of over 30 years of research and results in private practice, workshops and seminars. It is about your health, wealth and joy. It offers new ideas, approaches and techniques to enrich your life.

Tom received a bachelor’s degree in commerce and finance from the University of Virginia in 1961 and a doctorate of naturopathy degree from The Clayton College in 1993. He received a Doctor of Divinity degree from the Compassionate Service Theological Seminary in 2007.

He learned a great deal about health in recovering from polio at age 8 and a near fatal auto accident at age 16. Working in corporate America, his life changed radically at the age 38, when he was diagnosed with a terminal degenerative disease. Healing the condition naturally, Tom began a new phase of life, dedicating his life to helping others. His story was published nationally in Prevention magazine.

Tom is the founder of the International Breath Institute and the Academy for Coaching Parents International. He is a dynamic workshop facilitator and inspirational speaker who has led fire walks, appeared on television and radio, taught college courses in intuitional development and presented workshops and seminars in the US and abroad for the last 30 years.

You have subscribed to alerts for Tom Goode.

You have been added to Tom Goode's favorite list.

You can also sign-up to receive email notifications whenever Tom Goode releases a new book.