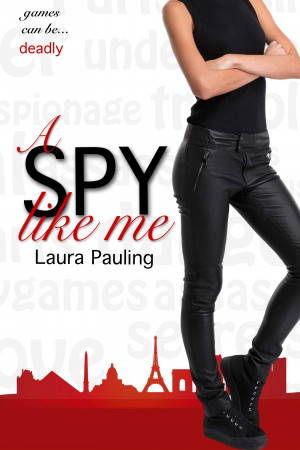 By Laura Pauling
Rated 4.00/5 based on 1 review
Games can be deadly.

After dodging bullets on a first date, eighteen-year-old Savvy turns into the accidental spy and falls for a hot assassin in Paris. More
Eighteen-year-old Savvy Bent expects fireworks on her first date with Malcolm - in Paris! Except over a picnic of sparkling cider and strawberry tarts, a sniper shoots at them. That's only the beginning. From the top of the Eiffel Tower to the depths of the catacombs, Savvy must sneak, deceive, and spy to save her family and friends and figure out whether Malcolm is one of the bad guys or not before she completely falls for him.
Download: epub mobi (Kindle) pdf more Online Reader
rtf lrf pdb txt
Price: Free! USD
Add to Library
Create Widget
Tags: romance spy fiction mystery and detective ally carter gemma halliday humor adventure teen action adventure espionage female gallagher series mysteries and detectives spying in high heels
About Laura Pauling

Laura Pauling writes about savvy spies, murder and mystery. She lives the cover of suburban mom/author perfectly, from the minivan to the home-baked snickerdoodles, while hiding her secret missions and covert operations. But shh. Don't tell anyone.

Reviews of A Spy Like Me by Laura Pauling

I was honestly completely surprised by my reaction to this book. I was winding down from a bad day, and decided to just take a peek at the first chapter, to see if I was in for an okay read or a big stinker (I was in a bit of a pessimistic mood at the time).

Next thing I knew, it was past midnight and I had torn through half the book. The only reason I forced myself to put it down then was because I have small children who WILL be up at 7 am, no matter how late I stay up, and they don’t let me stay in bed if they’re awake.

Savvy was funny and sassy, and I liked her immediately. My heart went out to her poor fumbling spy-wannabe father, and I was guessing about the other characters right along with Savvy for most of the book. And the Parisian setting was a lot of fun, even though all the pastries made me ridiculously hungry.

The pacing of this book was very quick, and the chapters felt like they were just flying by. Each time I’d reach the end of a chapter, I couldn’t just stop there, so I’d read “just one more.” There is a good amount of action, escapes and intrigue, and while I predicted some of the plot twists, some of them definitely took me be surprise.

I did have a few issues with the book. The first (and I have this problem with YA heroines a lot) is Savvy’s willingness to just let things go, or not ask about them out of spite. Without getting into spoiler territory, I’ll just say that something shocking and potentially catastrophic will happen, Savvy will be consumed by curiosity…and then someone with the power to clue her into what’s going on will annoy her, then offer her the missing information. And she will pass, because she’s being spiteful. I kind of wanted to take her by the shoulders and shake her. Doesn’t the knowledge of why someone is trying to kill you trump your bruised ego? Apparently not.

Also, I found Savvy’s reactions to the romantic story line far-fetched. One minute she’s cowering in fear, afraid that her discovery could lead to her torture or death, and the next minute she’s…kissing? I could buy it if it was done in a spy-like way, using her feminine wiles to get herself out of a tricky situation, but that’s not the way it happens. Instead, she seems totally at the mercy of her hormones, which are utterly oblivious and independent of her fear and anger.

I’m sorry, but even as a teenager, if I was afraid the boy in the next room kidnapped my friend and was trying to kill me, I am pretty sure my hormones would be dormant, if not completely extinct. I don’t care how cute he is.

And I was a fan of the crazy roller coaster plot right up until the end. A couple new elements were introduced to the story line close to the end of the book that I felt muddled the plot rather than helped resolve it. I would have been happy just learning who was trying to kill who and why, without bringing in new characters and associations.

But despite my complaints, they really didn’t do much to detract from my enjoyment of this book. I could overlook them because I was enjoying the pacing and the characters so much. This was a fun, witty, fast-paced book that I’m thrilled I agreed to review. Thank you, Laura Pauling, for having faith in a new blogger. I’ve now read enough great indie titles to know that indie does not = bad, and I’m glad I overcame my unfounded misconceptions to read this book. I enjoyed it immensely, and am excited to read about more of Savvy’s adventures.

You have subscribed to alerts for Laura Pauling.

You have been added to Laura Pauling's favorite list.

You can also sign-up to receive email notifications whenever Laura Pauling releases a new book.