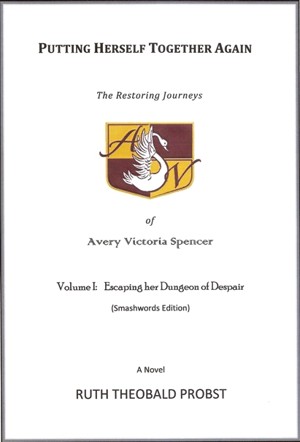 Putting Herself Together Again: Escaping Her Dungeon of Despair

By Vivian R. Probst
Volume I of The Restoring Journeys of Avery Victoria Spencer. Avery Spencer sat on a wall--looking very much like a successful bank president. Avery Spencer had a great fall—into despair as she faced the truth of her desperate financial circumstances. Putting herself together again begins with a glass of wine, a nap, and waking trapped in a medieval castle. More
PUTTING HERSELF TOGETHER AGAIN:
The Restoring Journeys of Avery Victoria Spencer
VOLUME I: ESCAPING HER DUNGEON OF DESPAIR
A Work of Fiction by Ruth Theobald Probst

Avery Spencer sat on a wall--looking very much like a successful bank president.
Avery Spencer had a great fall—into despair as she faced the truth of her desperate financial circumstances.
There were no kings horses; there were no kings men (not one),
To put Avery Spencer together again…so she drank a few glasses of wine, lay down to take a nap, and woke up trapped in a medieval castle. It is here inside her inner universe that she will begin to put herself together again.
Avery must be willing to tell the truth—she must be willing to admit and face her despair. Only that can set her free from a world of excruciating inner pain which is defended by a viciously self-protective psyche. Extraordinary guides and incredible events wait to lead Avery to those precious broken and missing aspects of herself that are still pulsing with life, but she must take that first step. As Avery allows herself to travel through her despair—she finds incredible treasure; as she gathers herself together, she restores not only herself, but her entire world to wholeness.
***
Most of us are disconnected from our power in some area of life. Many of us feel that pieces of ourselves are missing and we suffer. We might mask our pain through superficial remedies, but unless we take that inner journey to put ourselves back together, our pain will continue to mutate into different forms as it seeks us out—not to destroy us, but to bring us home to ourselves.
Through the restoring power of stories, Intention Fiction (IF)™ assists us as we travel that sacred path to putting ourselves together again.
Available ebook formats: epub mobi pdf rtf lrf pdb txt html
First 20% Sample: epub mobi (Kindle) lrf more Online Reader
pdb
Price: $2.99 USD
Buy Add to Library Give as a Gift
How gifting works
Create Widget
Tags: new release selfhelp motivational inspirational inspirational story lifes lessons motivational story uplifting story trauma healing dream messages lessons for life despair from debt becoming real finding greatness joy and fun putting herself together again
About Vivian R. Probst

At her wits’ end on March 10, 2000 Ruth awoke to a powerful vision that began to change her life. From an attitude of “Why me?” to “Teach me!” Ruth gave up the quest of bravely struggling to cope with her burdens (that had only grown heavier over time in spite of numerous therapies) and began to ask for the gift of their wisdom. She learned that every one of her life issues was actually an ‘essential burdens’—a very powerful teacher with extraordinary wisdom that could only be revealed as Ruth was ready to receive it.

At first Ruth believed that one story was all she would ever write. Imagine her surprise as again, through a dream, she was shown that before she would publish a series she titled ‘Reviving Avery Victoria Spencer, there would be four volumes. And more would come!

The result? A series of healing fables and a gift of assisting others who desire to learn the wisdom of their burdens. Through her writing (owned by LifeMark Press) and her LifeMark Institute for Greatness, Ruth provides individuals and businesses with tools to transform their own ‘essential burdens’ as she calls them, into invaluable life lessons through stories. Ruth does her work with clarity, an engaging style, and with a gentle, humorous, yet powerful broad stroke so anyone can apply it.

Ruth heads a prospering company, and with her husband, shares partnership in a fulfilling marriage. In the midst of a supremely busy schedule of lectures and workshops, she writes and makes her home with her husband near Milwaukee, Wisconsin, in close proximity to most of their children and a growing circle of grandchildren. 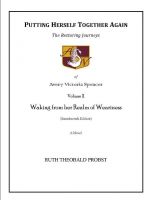 You have subscribed to alerts for Vivian R. Probst.

You have been added to Vivian R. Probst's favorite list.

You can also sign-up to receive email notifications whenever Vivian R. Probst releases a new book.