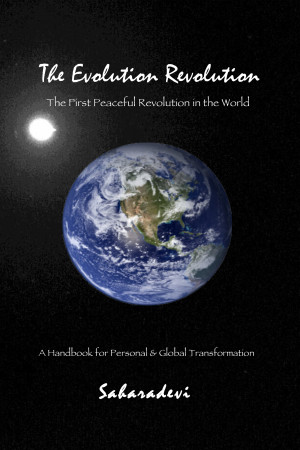 The Evolution Revolution (A Handbook for Personal & Global Transformation)

By Saharadevi
Saharadevi introduces us to the Evolution Revolution: an expansion of Consciousness taking place on the Planet, and invites us to be active participants in the phenomenon.

In easy to understand terms, she provides insight into aspects of self that either interfere with or enhance this expansion in an individual and introduces simple practices that enable one to connect with this growing Awareness More
In this revelatory work, Saharadevi introduces us to the Evolution Revolution—a Great Awakening taking place on the Planet—and invites us to be active participants in the phenomenon.

In easy to understand terms, she provides insight into aspects of self that either interfere with or enhance this expansion in an individual—and introduces simple practices that enable one to connect with this growing Awareness.

"By consciously participating in this evolutionary process—expanding one's awareness of Self, and dissolving the mis-identification with the lesser self—each one of us has the power to contribute to an evolved global civilization," she declares.

The Evolution Revolution is the answer to Jeremy Rifkin's question: “Can we reach biosphere consciousness and global empathy in time to avert planetary collapse.” (The Empathic Civilization: The Race to Global Consciousness in a World in Crisis, Tarcher)

If enough of us embrace this rEvolution, we most certainly can.

Coming of age in the Sixties, Sahara was fully engaged in the activities of the time, from Anti-War protests to Civil Rights demonstrations; then turned-on, tuned-in, dropped-out and embarked on the Spiritual Path when discovering it was possible to ‘know God.’ Making this her raison d'être, through the years she has done whatever presented itself to her, experiencing at least three or four different sides of the tracks, from first class to no class.

One of the first group of Yoga Teachers trained by Swami Satchitananda at the IYI in NYC, she served as Mother of the Ashram for five years. She was also the only young white woman driving a taxi in NYC in the early 70’s.

In 1994 she was struck homeless in the same way Ramdass considers he was “stroked”—by an intangible force. One day she was relocating from a northern state to a more desirable clime, a week later she was sleeping in her car, realizing her life would never be the same— embarking on what would become thirteen years of homelessness—first in Sedona and then carried around the world with NVMS, including five unexpected years in India—called telepathically by an Indian Master.

Sahara has been receiving frequency upgrades of a profound nature over the past couple years, including a blast from the Lion’s Gate Portal of 8.8.2019, after which she had no need of food for a period of six weeks, living mostly on Light.

During her period of homelessness, she freelanced for the Good Times of Sedona and launched The Face of Love™ B&W portrait photography; had a series of articles published in Yoga Scotland Magazine; served as Editor of Spiritual Impressions magazine in India; and edited the work of Swami Nishchalananda in Wales.

Her previous work: The Evolution Revolution/The First Peaceful Revolution in the World—A Handbook for Personal & Global Transformation (2008) was self-published and sold 500 copies in the USA and the UK.

Her book of Songs, Psalms & Poems: The Evolution Revolution: A Journey of Awakening is in the collection at Poets House, NYC.

She is the creator of The Face of Love™ portrait photography: the face we show to others but never see ourselves, and The Uplift & Inspire Collection—pithy messages in postcard format

Throughout 2017 and 2018, Sahara underwent a series of upgrades in Consciousness and frequency, and is designated a Vibrational Catalyst and LightBringer. Danielle Egnew/PsychicMedium calls her "A huge empath...a huge healer...a huge teacher," and "A walking lightbulb full of Love, elevating Consciousness everywhere she goes...

Her life is dedicated to “Transforming the fabric of reality for the Well-being of All.”

You may listen to The Evolution Revolution rap here: https://soundcloud.com/siriusgalore
Written in 1999, maybe the world is ready…

You may listen to a Pecha Kucha 2020 presentation here: https://www.youtube.com/watch?v=R_rp6JvKUAk&t=11s

You have subscribed to alerts for Saharadevi.

You can also sign-up to receive email notifications whenever Saharadevi releases a new book.