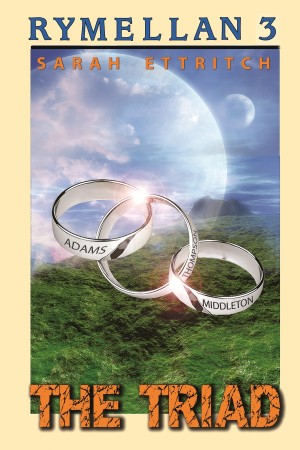 Rymellan 3 contains the following stories: No Going Back, Crossroads, Convergence, Chosens, and Joined.

I bought and read this book immediately after finishing Rymellan 2: Shattered Lives because I wanted to see how Lesley handled the realization that she had at the end of that book. I found the story compelling and wanted to keep reading.

It was only after finishing all three books that I stopped to think about what was missing from the series.
I'm not listing my questions here because they are spoilerish. Basic issues about world-building. (They are included in the review on goodreads.com which has spoiler tags.) None of the questions threw me out of the book while I was reading it; they only occurred afterwards which emphasizes how caught up I was in reading the story.

(reviewed 28 days after purchase)
Erin Miller reviewed on April 10, 2012
(no rating)
Sarah Ettrich lives in Canada and has penned amazing stories for the lesbian community. Here is a review of her third novel in the Rymellan series which is called Rymellan 3: The Triad.

In Rymellan 3: The Triad by Sarah Ettrich, Mo is developing feelings for her third chosen or rather fiance/wife, Jayne Adams. The arrangement that Lesley, Mo, and Jayne had, which was to be civil but not get in each other’s way, is now coming to an end due to this. They know that the triad depends on their getting along and loving each other but it is very hard to do.

No one who is into monogamy wants to willingly share their partner with a third party, and it is a constant struggle between the trio. In the story the Chosen council decided they were for each other, since using science they could tell who a person’s best match is. This I don’t agree with but it makes sense in the story itself, but I would never agree to this in real life!