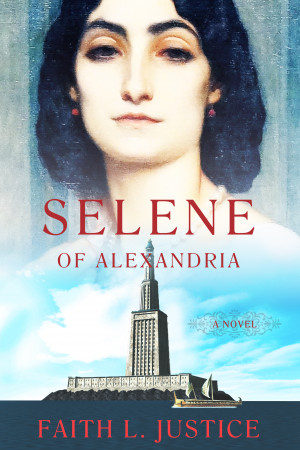 Rated 5.00/5 based on 2 reviews
This story of ambition, love and political intrigue brings to life colorful characters in an exotic time and place. In AD 412 Alexandria, in a city torn by religious and political strife, Selene struggles to become a physician. Hypatia, Lady Philosopher, and Prefect Orestes offer their patronage and protection. Will it be enough to save Selene from her own impulsive nature? More
A hunger for a life beyond marriage. When a young woman strives to make her mark, will all her dreams burn to ash at the stake?

Alexandria, AD 412. Selene longs to study as a doctor. But as the daughter of a powerful councilor, she’s frustrated by the expectation she bury her ambitions and marry well. She hatches a dangerous scheme to enlist the patronage of a famous female philosopher in the hope of gaining her father’s support.

With her patriarch’s blessing, she sets out to achieve her dream. But when her patroness comes under fire from an ambitious bishop, the tenacious young woman finds herself caught in the crossfire. Can she survive a wave of riots, plague, and a deadly accusation of witchcraft?

Praise for Selene of Alexandria:

"…an entertaining and enlightening novel....a fine read through and through."
– Midwest Book Reviews

Faith L. Justice writes in her historic land marked home “The Suffragette House” in Brooklyn, New York where she lives with her family and the required gaggle of cats. Her award-winning fiction has appeared in such publications as Circles in the Hair, The Copperfield Review, and Beyond Science Fiction and Fantasy. She’s published articles in such venues as Salon.com, Writer's Digest, and The Writer. Faith is Chair of the Historical Novel Society--New York City chapter and Associate Editor for Space and Time Magazine. She co-founded a writer’s workshop many more years ago than she likes to admit. For fun, she digs in the dirt – her garden and various archaeological sites.

Selene of Alexandria
Book trailer for "Selene of Alexandria", a gripping tale of ambition, love and murder that brings to life historical characters and an exotic time and place. Selene is drawn into a deadly rivalry between Church and Empire; and comes of age amidst riot, plague and political intrigue. "This book is outstanding, not just for a first novel, but for any novel."--Lacuna: A Journal of Historical Fiction

Reviews of Selene of Alexandria by Faith L. Justice

This book has everything... It was such a great story.

I was very attached to Selene. She was just so real. While the story focused around Selene there were so many other things that were going on around her. Even when the story didn't focus on Selene she always managed to get herself right there in the middle of what was going on. There were times when I wanted to knock some sense into her, but I knew that she could handle whatever situations she was placed in.

The ending was great. While not everyone had a happy ending it was very realistic. There were a few unexpected twists that really added to the tension of the story, but they made for great reading.

The story was so great, it had everything. It was exciting, endearing, suspenseful, and emotional. There was a very tense felling around everything. The fight for power in the city, the fight for Selene to get what she wanted out of life, the fight of religion in the city. Everything was marked with tension.

This one did take me a while to read. I spent many hours with Selene, Hypatia, Phillip, Rebecca, and Orestes. I'm not sure why it took so long for me to read it, as it was a fairly fast-paced story.

Despite the time it took me to finish it was well worth the read. It was beautifully written, it was an intelligent story, and it was easy to escape into Selene's world.

(reviewed the day of purchase)
Waheed Rabbani reviewed on June 6, 2010

While most of us are familiar with the early Egyptian historical periods, during the reign of the Pharos, Alexander, Cleopatra, Caesar, Mark Anthony and others, little is known about a Greek lady philosopher named Hypatia. Faith Justice has chosen to pen a historical fiction novel during Hypatia’s life and times in Alexandria during the 410s AD. By then although Christianity had become the official religion of the Roman Empire, a significant populace of other believers, Jews and pagans, existed in Egypt. The civilian rule was administered by the Constantinople appointed Prefect (governor), while the Patriarch (bishop) presided over the Christian church affairs.

This heart-wrenching story is narrated through the eyes of a young girl, Selene, born to a land-owning Christian family. Her mother having died, she is brought up by her ailing father and an elder brother, although they are busy in business and other duties. A second brother, her childhood playmate, joins the army and leaves for service overseas. Hence, Selene, having to grow up on her own, develops an independent mind. Even though it was most uncharacteristic for girls of her time, she decides to become a physician. Her desire blossoms when she witnesses the death of her beloved mother and decides to “thwart death any way she could.” She shears her hair, disguises herself as a boy and with the help of her brother attends Lady Hypatia’s school. Hypatia is taken in by Selene’s courage and helps her—with some assistance from the recently appointed Prefect—to overcome her father’s vehement objections to embark on a medical education. Herein lays Justice’s skillfulness in narrating the story. We are able to observe the lady philosopher through the trials and tribulations and romance that Selene encounters.

Although a movie, "Agora," on Hypatia’s life was made in 2009, one of the reviewers on its debut at the Cannes Film Festival [1] had remarked that a problem with the movie is that it struggles to properly develop the romantic side of the story, Justice’s novel has no such “problem.” While, keeping with the historical facts, Hypatia remains virginal, there is no dearth of romance in the story. Justice has skillfully woven three love-stories into the plot to add much interest to make the novel into a historical romance epic.

Readers’ interest will also be maintained by all the intricate details of the 5th Century life in Alexandria, the surroundings, buildings, people’s clothing, food and everything that will perk our imagination and enable us to walk and sit beside the characters. The fruits of the research that Justice began in 1980 show amply. For instance when describing the top of the sarcophagus of her girl-friend’s coffin—that another less careful writer may have simply referred to as a ‘cover’—Justice writes: “… The lid standing on end next to the coffin was covered with Christian symbols – an ankh, a lamb in a meadow – mixed with traditional Egyptian death scenes. The Sky Goddess spread her wings over the world in protection while an ibis speared fish in the Mother Nile …” Such evocative writing would surely make the cover appear before our eyes.

Selene puts her medical knowledge to good use on several occasions. She brings her father back to life after a severe heart-attack and administers first aid to victims of the religious riots. It was her timely cesarean on her girl-friend—who had died moments earlier during child birth—that saves the baby. But it gets her in trouble with the jealous physician, who complains to the Patriarch of Selene’s unqualified surgery. Selene gets dragged first through a ‘malpractice’ trial and then a charge of witchcraft. The Patriarch, who had been systematically engaged in having his people riot and expel the Jews and pagans from the city, takes this opportunity to excite the inhabitants against the aging Lady Hypatia. Selene is caught in the conflict between the fanatical Patriarch and the Roman authoritarian Prefect, who develops a soft corner in his heart for her. While historians have been searching, over the centuries, for justifications for Hypatia’s unpopularity with the Christian church, through skillful plot twists, Justice has provided us a plausible reason for that unspeakable event conducted by an unruly mob.

Selene of Alexandria, at 346 pages it a moderate length book that usually requires a few sittings to complete, but Selene’s last 100 or so pages are so engrossing that they will definitely make one read those to finish, regardless of the lateness of the hour. Having closed the book, it’s the kind of novel that lingers for quite some time in one’s mind. Finally, Justice has introduced another charming aspect of the novel. Readers and book club members would likely spend many thoughtful hours debating its ending.

You have subscribed to alerts for Faith L. Justice.

You have been added to Faith L. Justice's favorite list.

You can also sign-up to receive email notifications whenever Faith L. Justice releases a new book.