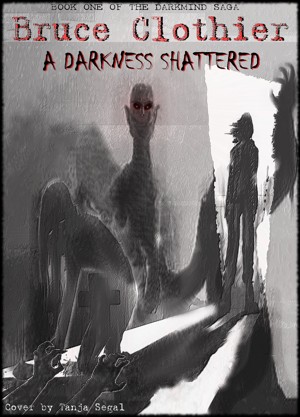 Bruce Clothier was born and raised in Michigan. After high school, he spent 12 years serving in the US Army and US Coast Guard. Some of his(many) hobbies include: Astronomy, model ship building, playing drums and writing. He is an avid golfer, enjoys playing softball and ice hockey and roots for the Michigan Wolverines, USC Trojans and Detroit Lions and Red Wings. He has been married for 26 years, has three children and one grandchild.

Reviews of A Darkness Shattered by Bruce Clothier

A Darkness Shattered, by Bruce Clothier, begins as do most books of this genre.....all hell breaks loose! I must admit that initially I didn't expect much. Families find themselves separated in the middle of a zombie apocalypse, and their stories go from there. What I didn't expect was the author's gift with building characters and relationships.

Generally, I don't like to make comparisons between books and/or authors, but I think here it's appropriate. Take The Stand by Stephen King & Swan Song by Robert McCammon (which happen to be my two favorite horror books) and mix them with some lovely zombie entrails, add a dash of a budding romance, and there you have A Darkness Shattered.

I appreciate authors who can express intensity, emotion, and love without having to resort to repetitive swearing and graphic sex. It is refreshing to read this type of book.

Keep them coming, Bruce!! Can't wait for the next one!

This story caught me completely off guard. I was looking for something to while away the time until Mark Tufo's 'Zombie Fallout 6' and the 4th installment of Shawn Chesser's 'Surviving The Zombie Apocalypse' surface, but it has easily joined the above 2 works in terms of storyline and progression of characters. I am so glad there will be a sequel.

Once again, it reminds me that should an apocalypse take place here in the UK, the ordinary citizen would soon be zombie fodder as we would not have access to guns and ammunition. Even finding a bow and arrows would be harder than you may think!

Well done Bruce, hopefully this story will continue past the sequel and who knows, in the near future I may have to find something else to fill in the time until Tufo/Chesser AND Clothiers next offerings appear.

I never read zombie stories. I don't like scary stories. But I sure did love this scary zombie story!
The author's writing... Magnificent!!! Such a pleasure to read - scary or not!!! Should win awards!!!
But the biggest surprise for me was how much I enjoyed the story and how wonderful the story is. I would not expect such a beautiful story from a book about zombies. I can NOT wait for book 2!!! I will be 1 of the 1st to read it!!!

I was drawn into this book right from the start. Following Micheal and the other characters through the book was a fantastic journey, watching them evolve. I became attached to some and repelled by others. The description and detail of the events was phenominal and I had a vivid visual of the scenes the entire way through. Thank you Bruce for sharing this story... I could rant on and on but I am afraid I would give up to much if I let myself start! I recommend you give it a read and find out for yourself!

I love a good horror story. My bookshelves are packed with Stephen King and Richard Laymon. I'm an avid reader and will read just about anything, but for some reason, I've never been very intrested in zombies. While looking for another book, I came across this title and was intrigued.

I find it hard to believe Bruce Clothier is a "first time" author. His characters are well thought out and the story line works. The zombie tagline is almost incidental to the story at this point. His vision of a post apocalyptic world is extremely believable and discovering each character's strengths and weaknesses as they learn how to survive this disaster becomes the true story.

What will happen to Michael and Abby? Who or what is Andy? And let's not forget Herbie the Newfy. What role does he play in the resolution of this conflict?

I find myself waiting impatiently for the next installment.
I'm hooked!

(reviewed the day of purchase)
Tammy Dewhirst reviewed on June 3, 2012

Michael Nelson is a teenager home alone when the Zombie Apocalypse begins. When it becomes apparent that his parents aren't coming home, he sets out from Kansas City to his Grandparent's farm in Illinois. Along the way he meets Abbie Nelson, a foster child who had been looking to escape. This story follows the teenagers as they navigate the post-apocalyptic world with hope and trust in each other to guide them.

"A Darkness Shattered" is the first book in the Darkmind Saga.

It has been a very long time since I last stayed up all night and read a book. At 3am I realized that I needed to put my Kindle down and get some sleep. "A Darkness Shattered was so vivid a telling of a post Apocalyptic world that the imagery of the narrative kept me entranced. Clothier is a brilliant storyteller who manages to be vivid and descriptive without bogging the story down in any way.

Clothier highlights his Zombies by giving us the child zombie in the party dress and the well-dressed zombie and the zombie in uniform shirt (to name a few). They are an image of who they were and who they'll never be again. Clothier's zombies aren't a character as a whole; they're everyone you know in your life.

This story isn't about the Zombies though, not really. It's about Michael and Abbie and their struggle to survive. Its about the way humans react in the face of crisis. How they become who they were really meant to be. It's about young love blooming in terrible odds.

This is a coming of age story, and done so wonderfully that I am eagerly anticipating the next novel in this series. What happens to Michael and Abbie? Where will they go next? This is a great read that I'd recommend for anyone who likes sci-fi or dramas about human nature.

(reviewed 6 days after purchase)
Macy Almeida reviewed on May 10, 2012

The book was amazing, the storyline, the caracters, the survivel it's a book like i've never read before. I'll make it simple because i can't find the words to describe it, it's just great! I strongly suggest everyone to read it! 5 stars of course!

A Darkness Shattered is a story of survival, coming-of-age, and, surprisingly, love, in the face of a zombie apocalypse. Michael is a nice boy whose parents are presumably dead due to an attack of zombies. Abby is an already-orphaned runaway who is used to survival on the run. The two meet up, accompanied by one of the most lovable pet characters I have read about in a long time, Herbie, a Newfoundland dog (if this book breaks out, and it should, everyone will want one). Although gory and somewhat sad in parts, author Bruce Clothier develops a realistic and credible account of what a national emergency could entail, whether by zombies, war, terrorism, or disease. His characters are believable and come alive in my mind, and their dialogue rings true. I highly recommend A Darkness Shattered to anyone who enjoys well-written action/adventure fiction.

I will make it simple, a great balance of Gore and characters. It's hard to write some gore, but this was a tasty squishy morsel of undead yumminess!!

A Darkness Shattered was a gore filled, action packed, romp through the zombie apocalypse. Michael finds himself alone in a crowded world of undead and then, with Abby, finds that he never has to be alone again. I found each and every character believable, even the antagonists were real people, not just caricatures. I loved how the book was survival, true to the horror genre, and had me on the edge of my seat wondering if they would make it. Then the paranormal touch at the end had me salivating for the second of the Darkmind Saga.

The story of Michael and Abby's journey to find one another was wonderfully rich. I would like to talk about my favorite parts but don't want to spoil it for another reader. Give this one a chance. I am glad I did. I can't wait to see what Bruce Clothier has for us next.

You have subscribed to Smashwords Alerts new release notifications for Bruce Clothier.

You have been added to Bruce Clothier's favorite list.

You can also sign-up to receive email notifications whenever Bruce Clothier releases a new book.