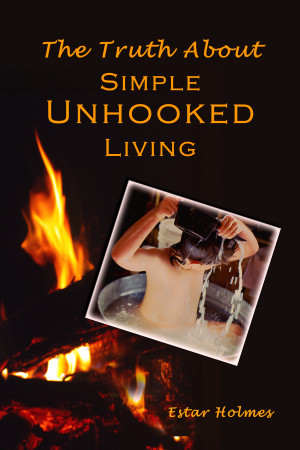 The Truth About Simple Unhooked Living

By Estar Holmes
Rated 3.67/5 based on 3 reviews
Find out how to manage a home comfortably and safely without electricity and running water. Why would anyone want to live that way on purpose? The reasons span from radical conservation to being self-reliant when the system falls apart. If you just want to weather water shortages and power outages gracefully, why not learn from those who live without pipes and wires full time? More
Can you survive without a TV, vacuum cleaner, shower, toaster, dryer, and flush toilet? Why would you even want to try? You may be surprised to know all those those things are completely unnecessary, and I can tell you how I survived just fine without them.

Good water, healthy food, and cozy shelter are necessities in my book. I like taking care of those basics as simply as possible. This book talks about the influences that pulled me in that direction and how I fulfilled my dream of living in the country. I did it by finding the lowest common denominator between low-tech and high comfort.

Through the experience I conclude that living simply can solve a lot of problems for people, Being self-reliant and resourceful is empowering. It's just a matter of learning new ways of doing things. Nowadays, we are blessed to be able to draw upon both ancestral traditions and appropriate technologies. There is no good reason for anybody in America to be homeless or hungry.

Unfortunately, being self reliant in nature is quickly becoming illegal at a time when it's needed most. Every elemental act, from building a fire, to drinking milk, and planting a seed has a regulation attached to it. The country is no longer free when people need permits to live a humble life. It hasn't always been this way. With all the new knowledge we have today, we could be entering into a golden age. Hopefully this book will will be among those that get people moving in the right direction.

The way things are going, the system will fall apart. It's currently like castles built on sand. When it crumbles, radical simplicity will be foisted on everybody, like it or not. Those who understand what they truly need, and how to get it, will be happier.

Estar Holmes creates content for traditional and digital media. The Truth About Simple Unhooked Living is her first e-book. There is more on how and why she prefers to live simply at simpleunhookedliving.wordpress.com, and some fun pictures at pinterest.com/unhookedliving.

Reviews of The Truth About Simple Unhooked Living by Estar Holmes

While there is a lot of useful advice in this book, all of it is buried beneath the author's political soapbox; separating the useful information from the ranting against the intrusion of government into the lives of private citizens becomes a chore very quickly. (It took me well over a year just to get through this book, and I've been known to read through books with 50k word counts in a weekend.) It is true that some places have written or unwritten rules against a lot of the practices of the DIY and off-grid lifestyles. That can't and shouldn't be avoided or glossed over. But this book definitely goes too far in the other direction; the first three chapters are more or less a political manifesto.

All of this highlights a problem that might otherwise have gone unnoticed; with all the focus on how the government is getting in the way, there is very little practical advice on how to either work towards changing government policy to be less hostile to off-grid living or evading government scrutiny when using these strategies. Either one of those could have been a complete chapter on its own, and there is definitely a demand for that kind of information. By the same token, the emphasis on the potential legal perils of living unhooked from the grid does as much to discourage those who might otherwise be interested in it as the actual physical and logistical challenges involved; in other words, the author is scaring away her potential audience. In Life After Doomsday by Dr. Bruce Clayton, he recalled going to a meeting of disarmament activists during the Cold War and finding their persuasion methods to be sorely lacking at best, and counterproductive at worst, and the author makes the same mistakes here by spending too much time on the negative.

If you are the type of person that is angry all the time about things you feel that you can't control or change, then you'll probably like this book even if you don't actually plan to use the information inside, because of the sense of solidarity. If you just want to get right to brass tacks when it comes to living without utilities... well, you're going to have to do some digging. Bring a shovel and some knee high rubber boots.

(reviewed 3 years after purchase)
Alan McDonald reviewed on April 25, 2015
(no rating)
You know the expression “Been there, done that”? Well this lady has. My pet hate about lifestyle books, particularly those involving rural life, is where people with a journalistic background and friends in the right places to promote their books get an international publishing house to publish and push their writings on something they have an idea about, or only limited years of experience. This is not one of them. Anyone who publishes with Smashwords does not have a publishing company behind them.

Although aimed primarily at the USA resident, virtually everything suggested by the author (she does not ram things down your throat and say you must do it this way) is applicable globally. All good, sound, practical advice from an experienced person. Much of it is essential reading for those people in urban areas where they are reliant upon electricity to run their homes. One power out without the information in the book will cost you a lot more than its price.

I have practiced what might be called “Simple Hooked up Living” for decades and still learned from the book. There is a very generous free sample, but as with all books, this necessarily includes the background and introductory portion – nevertheless with very sound information and advice. There is a wealth more in the remainder of the book. Go on, buy it.

Everybody could gain a lot by reading this simple book. I can really identify with the author, as I too lived a decade off the grid & learned the art of simplicity long ago, on all levels. I've lost everything to a house fire then again from divorce and a 2.5 year stint in prison for a DUI. I know about everything she is saying here, but others need to hear her message- especiall today! Good jod Estar!

Very practical and complete guide for living off the grid.  The book is not about solar power and wind generators, it's about everyday problem solving and finding what works best. This book covers everything.The authors 14 years of experience  will give you a solid knowledge base of practical and workable solutions to living a simpler more sustainable and rewarding life off the grid. Even old timers will learn a thing or two. I highly recommend this book.

You have subscribed to alerts for Estar Holmes.

You have been added to Estar Holmes's favorite list.

You can also sign-up to receive email notifications whenever Estar Holmes releases a new book.